Revolt of 1857 - First War of Independence Against British

The revolt began on May 10, 1857, at Meerut as a sepoy mutiny. It was initiated by sepoys in the Bengal Presidency against the British officers.

This war of Independence marked the end of rule by the British East India company. Post this, India was directly ruled by the British government through representatives known as Governor-General.

This article provides all relevant information related to the Revolt of 1857 and its causes and effects. This is an important topic for the Civil Services Exam and other government exams.

Download Revolt of 1857 notes PDF for UPSC exam preparation from the link given below.

Immediate Reason of Revolt of 1857

The immediate factor was the introduction of the ‘Enfield’ rifle. The cartridge had to be bitten off before loading it into the gun. Indian sepoys believed that the cartridge was greased with either pig fat or made from cow fat. This was against the Hindu and Muslim sentiments. Thus they were reluctant to use the ‘Enfield’ rifle. This was a flashpoint to enrage the soldiers against the British. This was believed to be the immediate factor for the revolt of 1857. 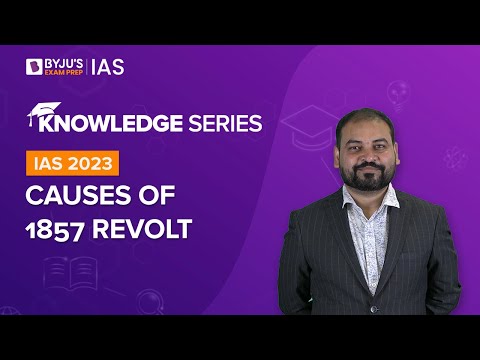 The revolt of 1857 was initiated due to various factors which are stated below:

To know more about the Social causes for revolt of 1857, refer to the linked article.

The major policies are listed below:

To more about such important land revenue systems, check the linked article.

These three settlements were highly exploitative, and in particular, the Permanent settlement had created a devastating impact. Thus the peasants were greatly encouraged to overthrow the British Government from India and led to their active participation in the revolt of 1857.

Military Factors – The Indian soldiers faced a lot of discrimination from the British officials with respect to their salaries, pensions, promotions. Indians were subjugated in the military while their European counterparts faced no such discrimination. This led to discontent and was a major military factor that resulted in the revolt of 1857.

To know more about military factors in detail, refer to the linked article.

The Vellore Mutiny took place even before the revolt of 1857 (50 years before). It erupted on 10th July 1806 in Vellore, present-day Tamil Nadu, and lasted only for a day, but it was brutal and it was the first major mutiny by the Indian sepoys in the East India Company.

The revolt of 1857 shook the foundation of British East India Company and disclosed their inefficiency in handling the Indian administration. The major impact was the introduction of the Government of India Act, 1858 which abolished the rule of British East India Company and marked the beginning of British raj that bestowed powers in the hands of the British government to rule India directly through representatives.

To know more about the major Impact of the revolt of 1857, refer to the linked article.

Causes of Failure of the revolt of 1857

The revolt was eventually not successful in ousting the British from the country because of several factors.

List of Important Leaders associated with the revolt of 1857

Who coined the name Sepoy Mutiny?

In India, the term First War of Independence was first popularized by Vinayak Damodar Savarkar in his 1909 book The History of the War of Indian Independence.

What was the immediate reason for the revolt of 1857?

There are many reasons that led to the revolt of 1857. Major reasons for the revolt can be broadly classified into – Political, Social, Economic, Religious, Military, etc. The causes have been discussed in this article under respective sections.