What is a Retreating Monsoon? During the months of October-November, the south-west monsoon winds become weaker and start to retreat from the skies of North India. This phase of the monsoon is known as the retreating monsoon.

The major sections in this article about the retreating monsoons are mentioned below:

This topic is important for IAS Exam, from the perspective of the Geography syllabus (GS-I).

The withdrawal of the retreating monsoon is gradual and takes a longer duration compared to the advancing one.

With the onset of retreating monsoon, skies become clearer and clouds disappear. The disappearance of clouds makes the climate of various places hotter gradually. Severe tropical cyclones emerge from the Bay of Bengal. The month of October-November is prone to severe cyclones.

During this period, the temperature comes down sharply. The sky also becomes clear.

As the monsoon starts retreating towards the south, the pressure gradient becomes low. Local pressure conditions usually affect the wind flow during that time.

It is during the retreating monsoon season in India that the southeastern coast receives a lot of rainfall; tropical cyclones also occur during this time. The state of Tamil Nadu receives almost half of its annual rainfall during this time. This is called the winter monsoon or the northeast monsoons.

The retreating monsoon brings rainfall in an uneven amount to different places across India. Some places receive heavy rainfall and places that witness scanty rainfall. 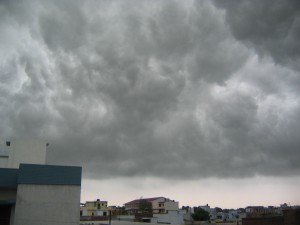 Given below is a sample UPSC prelims question:

Which of the following statements are correct: