Climate is about the average weather condition, which has been measured over many years. The climate of a place is affected by its:

It is about the day to day changes in the atmosphere. It includes changes in temperature, rainfall and sunshine etc. This article will provide details about weather, climate and wildlife of India. It is an important topic for the IAS Exam. Candidates can also download the notes PDF from the link given below.

There are four major seasons in India:

The grasses, shrubs and trees, which grow on their own without interference or help from human beings are called natural vegetation.

The Tropical Rain Forests are found in the areas receiving heavy rainfall and are also called evergreen forest as they always appear green. These forests are so dense that sunlight doesn’t reach the ground. Several species of trees are found in these forests, which shed their leaves at different times of the year. They include the mahogany, ebony and rosewood.

For example, the Andaman and Nicobar Islands, parts of North-Eastern states and a narrow strip of the Western slope of the Western Ghats are home of these tropical rain forests.

Also known as the monsoon forests, these tropical deciduous forests are less dense and shed their leaves at a particular time of the year. Some of the important trees found in these forests include sal, teak, peepal, neem and shisham. Tropical Deciduous Forests are found in Madhya Pradesh, Uttar Pradesh, Bihar, Jharkhand, Chhattisgarh, Odisha, and in parts of Maharashtra.

This type of vegetation is found in dry areas of the country mainly in the states of Rajasthan, Punjab, Haryana, Eastern slopes of Western Ghats and Gujarat. These vegetation have their leaves shaped in the form of spines which helps them to reduce the loss of water. For example, Cactus, Khair, babool and keekar.

The variation in heights of the mountains results in the variation of a wide range of species as the temperature gradually falls with an increase in the altitude. Between the heights of 1500 metres to 2500 metres, most of the trees that are found are conical in shape. These trees are called coniferous trees. For example, Chir, Pine and Deodar.

The Mangrove Forests are able to survive in saline water and are found mainly in the Sunderbans of West Bengal and in the Andaman and Nicobar Islands.

The Wildlife in India is very diverse. India is a hot-spot for biodiversity and is home to a large number and variety of animals.  The ecosystems in India ranges from the Himalayas in the north to the evergreen rain-forest of the south, the desert sands of the west to the marshy mangroves of the east. Tiger, the national animal of India, is found in various parts of the country. Several national parks, sanctuaries and biosphere reserves have been set up for their protection.

Several projects like Project Tiger and Project Elephant has also been started by the Government to protect these animals. The Gir forest situated in Gujarat is home to several Asiatic lions while the Kaziranga National Park, Assam is the home to India rhinoceros. A large number of elephants are also found in the state of Assam, Kerala and Karnataka. Camels and wild asses are found in the Great Indian desert and the Rann of Kuchchh respectively. Wild goats, snow leopards, bears, etc. are found in the Himalayan region. Besides these, many other animals are found in our country such as monkey, wolf, jackal, nilgai, cheetah, etc. India is equally rich in birdlife. Peacock is the national bird of our country. Some of the common birds that are found in India are parrots, pigeons, mynah, geese, bulbul, and ducks. There are also several hundreds of species of snakes that are found in India. Cobras and kraits are important among them. 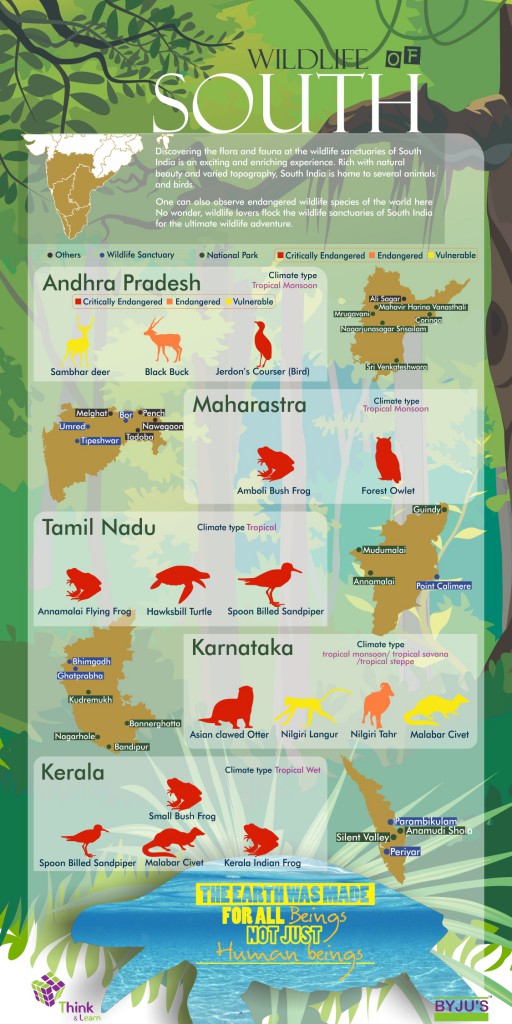 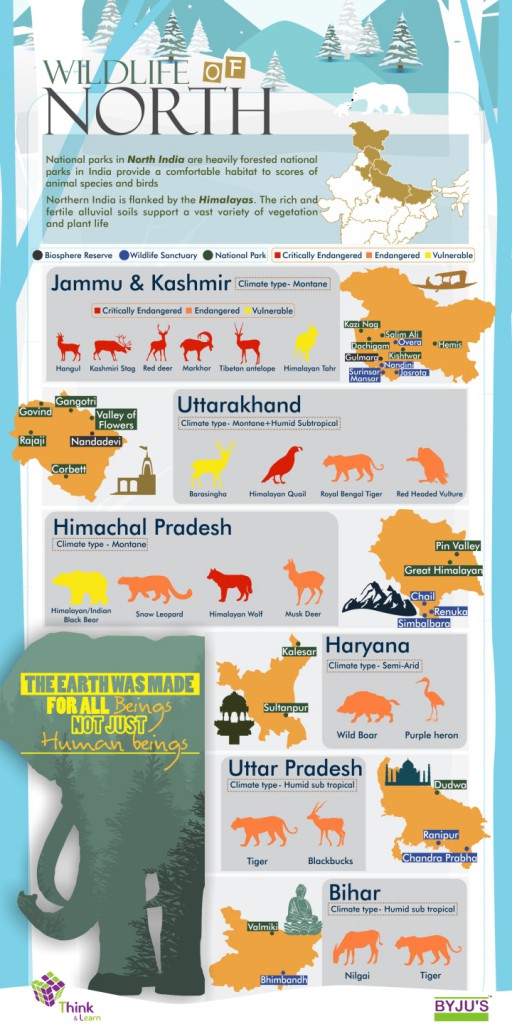 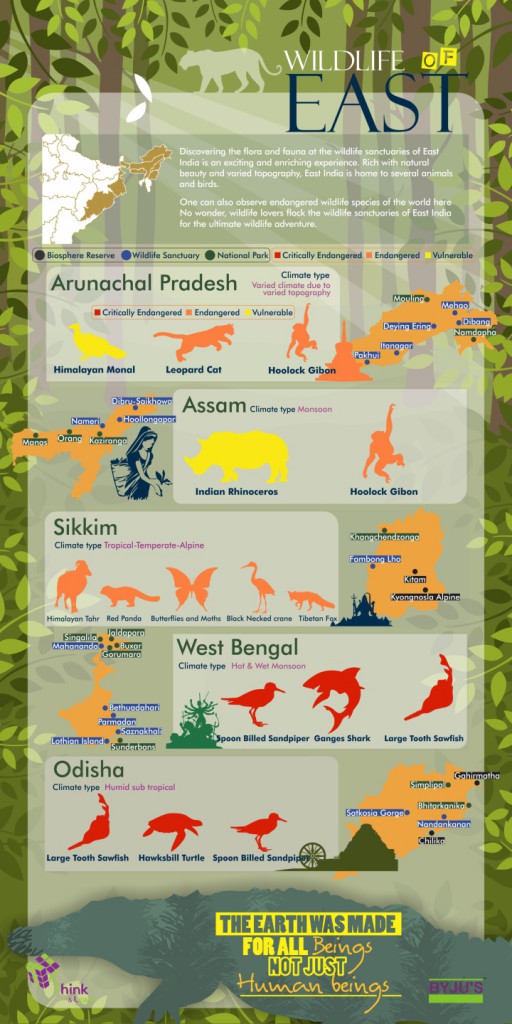 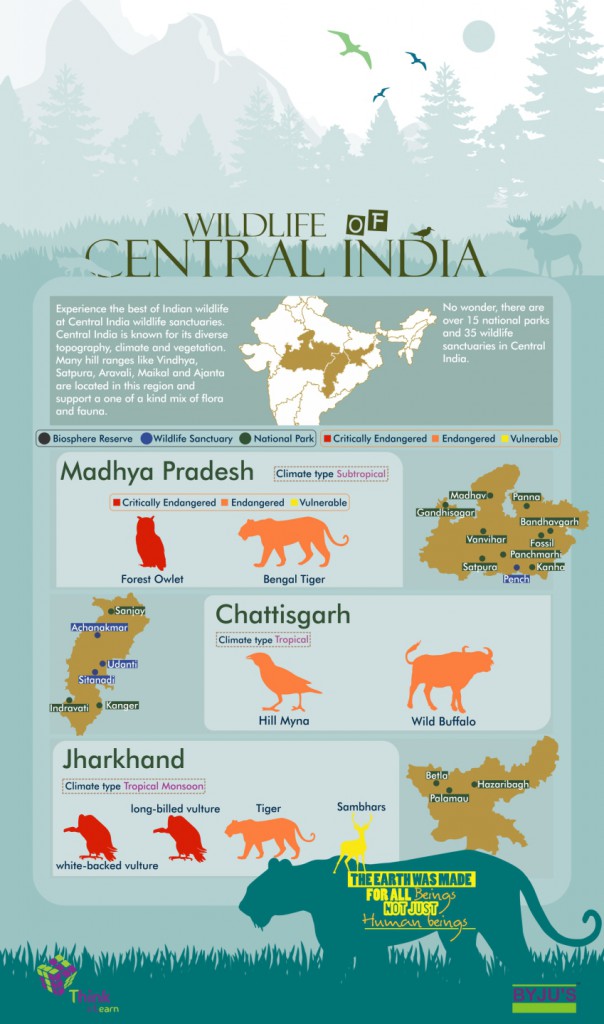 What is the difference between climate and weather?

The weather is about day-to-day changes in the atmosphere. It includes changes in temperature, rainfall and sunshine etc. However, the climate is about the average weather condition, which have been measured over many years.

Why are forests necessary?

Forests are very useful. Some uses are: It acts as carbon sink, absorbs carbon dioxide which is released in the atmosphere; the plants bind the soil, thus, they control soil erosion; forests provide timber for furniture, fuel wood, fodder, medicinal plants and herbs, lac, honey, gum, etc.; forests are the natural habitat of wild life.

The information provided in this article can be used in the Independence Day essay also.