Once present throughout the Indo-gangetic plains, its range is now limited to northern India and southern Nepal.

This article will give further details about the Indian Rhinoceros within the context of the IAS Exam.

Characteristics of the Indian Rhinoceros

The Indian Rhino is grey-brown in colour and has one horn on its snout. This one horn is its most distinguishing feature. Aside from its eyelashes, ear fringes and tail brush it is largely hairless.

Its single horn is found in males and females although not in newborn calves. The horn is made of keratin, similar to what’s found in human fingernails. The horns started to show after six years. The length of the horn is about 25 cm but horns upto 36 cm have also been measured. Further characteristics of the Indian Rhino is given in the table below:

Characteristics of the Indian Rhinoceros

Behaviour of the Indian Rhino

Adult male rhinos are solitary in nature. Usually Indian rhinos form groups consisting of females with calves that gather at wallows and grazing areas. They are active in early morning, late afternoons and at night. Excellent swimmers, they can also run at the speed of 55 km/h

Indian rhinos have few natural predators as their size and thick skin make them difficult targets, but unguarded calves are particularly vulnerable to the Bengal Tiger, Indian Leopard etc.

Females are largely solitary when they are without calves. Mothers will stay close to their calves for up to four years after their birth. 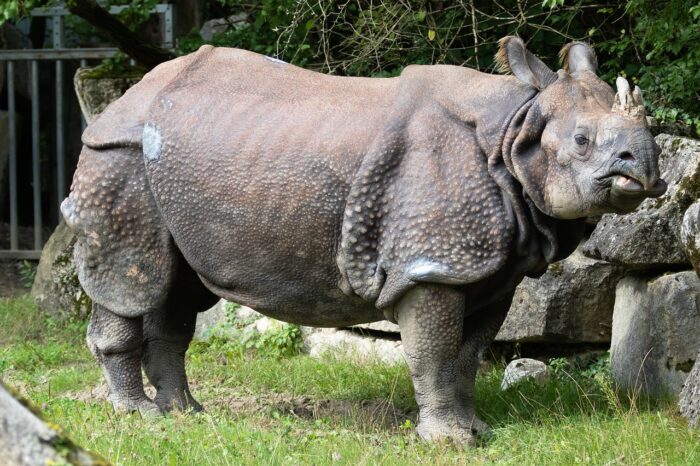 Conservation of the Indian Rhino

The IUCN Red List lists the Indian Rhino as vulnerable with its population range being severely limited. As per the World Wide Fund for Nature –India (WWF-India), the population of India rhinos is beyond 3600 as of 2020.

Find the list of national parks of India, by visiting the linked article.

The main threats for the Rhino population are as follows:

Due to human activities and natural disasters like floods, the habitat of the Indian rhinos is deteriorating causing large number of deaths

Since the population range of the Indian rhino is limited, with 70% of population occurring at a single site – Kaziranga National Park – an unexpected catastrophic event such as disease, natural disaster or habitat loss will have a severe impact on the Indian rhino’s status.

To ensure the survival of rhinos in case of epidemics, animals were translocated annually from Chitwan to Bardia National Park and Shuklaphanta National Park since 1986.

As rhino horns are an invaluable ingredient in traditional Chinese medicine, they are at an immediate threat from poachers. Almost 100 rhinos were poached in India between 2013 and 2018.

Although it was difficult to breed Indian rhinos in captivity, but Indian zoos became adept at the task in the late 20th century. They have also been bred in foregn zoos such as the Zoo Basel in Switzerland whose breeding program has been met with significant success.

Other conservation efforts by the Indian government have been largely successful in preserving the remaining populations of the Indian rhino, but poaching still remains a constant threat to this day despite efforts to control it.

Why are Indian rhinoceros killed?

By 1908, the population in Kaziranga National Park had decreased to around 12 individuals. In the early 1900s, the Indian rhinoceros was almost extinct. At present, poaching for the use of horn in traditional Chinese Medicine is one of the main threats that has led to decreases in several important populations.

Where are most of Indian rhinoceroes found?

The Indian state of Assam is home to the largest population of greater-one horned rhinos, with more than 90% in Kaziranga National Park.