The Asiatic Lion (also known as the Persian Lion or Indian Lion) is a member of the Panthera Leo Leo subspecies that is restricted to India. Its previous habitats consisted of West Asia and the Middle East before it became extinct in these regions.

Today their range is restricted to the Gir National Park in Gujarat.

The Asiatic Lion is one of the five pantherine cats native to India. The others being: the Bengal Tiger, the Indian Leopard, Snow Leopard and the Clouded Leopard.

This article will give details about the Asiatic Lion within the context of the IAS Exam.

It was announced in August 11, 2021 by the state government of Gujarat that it  will set up a state-of-the-art disease diagnostic and research facility for the conservation of Asiatic lions and to pre-empt and any fatal infectious diseases.

Characteristics of the Asiatic Lion

The colour of the Asiatic Lion ranges from sandy or buffish grey to silvery sheen in certain lightings. The males have a moderate mane growth at the top, compared to their African counterparts, as such their ears are visible. The mane is scarcely present around the cheeks and throat.

It has a larger tail buff compared to the African lion. The most striking characteristic character of the Indian lion is a longitudinal fold of skin along its belly.

Further characteristics of the Asiatic Lion is given in the table below:

Characteristics of an Asiatic Lion

Behaviour of the Asiatic Lion

Male Asiatic Lions are solitary but also form a pride consisting of three that rest, hunt and feed together. A pride of female Asiatic lions consist of 12 along with their cubs. They share their kill with other females but rarely with males.

As per available data, the range of male lions vary from 144 to 230 km in dry and wet seasons. During the summer seasons, densely vegetated and shady riverine habitats are preferred

Domestic cattle have been the preferred prey for the Indian Lion for a long time. Other than these they hunt sambar deer, nilgai, water buffalo, sambal deer. Outside the protected areas they prey on cattle and on rare occasions, camels. 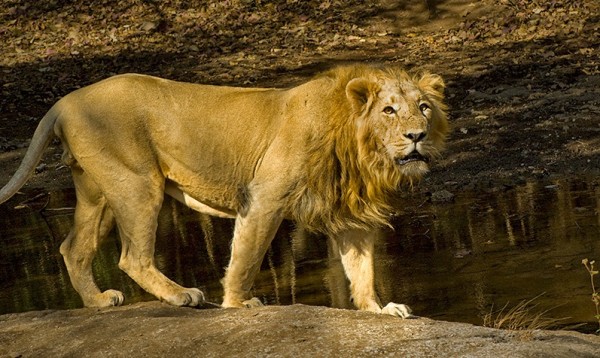 Conservation Status of the Asiatic Lion

Owing to its small population and restricted area of occupancy the International Union for Conservation of Nature (IUCN) has listed the Asiatic Lion as an endangered species.

The Indian Lion had presence in other parts of North India before extensive hunting by the British and local Indian rulers contributed to the decline in population. It was only through the conservation efforts of the Nawab of Junagadh that the lions of Gir. By the 1880s most of the lion population in northern India had become extinct.

The major threat to the Asiatic Lion population is its vulnerability to unpredictable events such as a plague or a natural disaster. There have also been few incidents of poaching reported as well. Additional threats are from the villages around the Gir National Park when the locals kill the lions in retaliation for attacks on livestock.

In order to redistribute the Asiatic Lion population through India, Asiatic Lion Reintroduction Project has been undertaken in order to safeguard the surviving population better . The Palpur-Kuno Wildlife Sanctuary was proposed as an ideal spot but political limbo and logistics of transporting the lions have put the project on hold.

Currently the Gir National Park of Gujarat is the only known habitat of the remaining Asiatic Lions in the world.

Q 1. What is the current status of Asiatic Lions?

Ans. As of 2021, the Asiatic Lions listed in Schedule I of Wildlife (Protection) Act 1972; in Appendix I of CITES and as Endangered on IUCN Red List.

Q 2. Where can Asiatic Lions be found in India?

Ans. Asiatic lions were once distributed upto the state of West Bengal in east and Rewa in Madhya Pradesh, in central India. At present Gir National Park and Wildlife Sanctuary is the only abode of the Asiatic lion.