Narmada Bachao Andolan – NBA is an Indian social movement led by native tribes, farmers, environmentalists and human rights activists against the construction of a number of large dams under the Narmada Dam Project across river Narmada.

The river Narmada flows through the states of Gujarat, Madhya Pradesh and Maharashtra. Know about the Major Indian River System for relevant details.

Also, read about the National Unity Day on the given link.

The aim of this article is to keep candidates abreast with the facts and relevant information about the Narmada Bachao Andolan. The topic holds relevance for various competitive or Government exams under the General awareness section.

Aspirants of IAS exam can also expect questions on Narmada Bachao Andolan in prelims as well as GS 3 of UPSC.

To read more about the Major Indian River Systems, check the linked article. 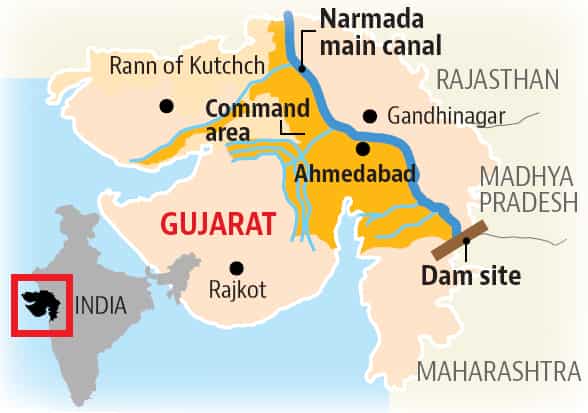 Narmada Bachao Andolan – How did it start?

Narmada Bachao Andolan is the most powerful mass movement, started in 1985, against the construction of a huge dam on the Narmada river. As per the Narmada Dam Project, the plan was to build over 3000 big and small dams along the river.

The proposed Sardar Sarovar Dam and Narmada Sagar were to displace more than 250,000 people. The big fight of the Save the Narmada Movement was over the resettlement or the rehabilitation of these people.

Aspirants can also know about various Inter-state water disputes in India on the linked page.

Read more on the World bank on the given link.

What is the main aim of Narmada Bachao Andolan?

Narmada Bachao Andolan also was known as NBA is a social movement formed by activist Medha Patkar. NBA consists of human activist, farmers, Adivasis, and people established on the bank of Narmada river. The main aim of the movement is against the large dams built or in process across the Narmada river.

Who led the Narmada Bachao Andolan?

Narmada Bachao Andolan was also joined by several NGOs with local people, professionals, and activists as the founders with a non-violent approach. It was led by Medha Patkar.

You can also check out the preparation strategies for competitive exams to fine-tune your exam prep.