This article gives a brief introduction of Nader Shah, an Emperor of the Persian Empire.It gives details on the expanse of the territory ruled by him and his military expedition to India, his fight against the Mughal Empire, and the massive defeat the Mughals had to face in the hands of a smaller but tactically brilliant Persian Army in the Battle of Karnal. This defeat of Mughals also led to wide-scale destruction and looting of Delhi by the Persian Army. 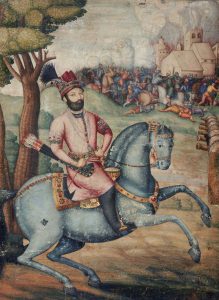 Nader Shah at the Sack of Delhi

The course of the Battle of Karnal

The aftermath of the battle of Karnal

Also on this day:

1920: The Nazi Party was founded in Germany.