The National Mission for Clean Ganga (NMCG) was implemented by the National Council for Rejuvenation, Protection and Management of River Ganga also known as the National Ganga Council. This mission was established in 12th August 2011 under the Societies Registration Act,1860 as a registered society. The National Mission for Clean Ganga (NMCG) under National Ganga Council is supported by the State level Programme Management Groups (SPMGs) in the state of Uttar Pradesh, Uttarakhand, Bihar, Jharkhand, and West Bengal. It is an initiative taken by the Government of India to address the pollution of the river Ganga by providing financial and technical assistance. 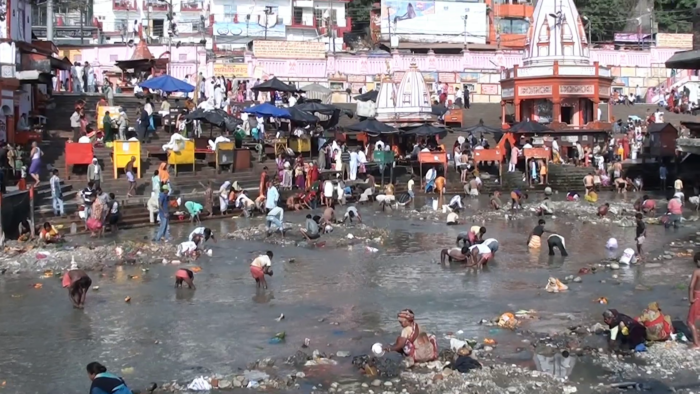 To know more about the National Ganga Council, refer to the linked page.

National Mission for Clean Ganga (NMCG) is an important topic for the IAS Exam. Candidates can also download the notes PDF at the end of this article.

Some of the major objectives of the Nation Mission for Clean Ganga are:

Government schemes are an important part of the UPSC syllabus. Aspirants must be thorough with the objectives and the activities of these major schemes for the IAS exam.

A lot of initiatives were taken before the establishment of the Clean Ganga Mission that targeted towards the reduction of pollution and cleaning of the river Ganga. Some of the major initiatives taken by the Government of India before the implementation of this mission are discussed below:

Candidates can refer to the UPSC Mains GS 3 Syllabus, Structure, from the linked article.

What is Namami Gange?

The Namami Gange Yojana is implemented by the National Mission for Clean Ganga along with its State Programme Management Groups (SPMGs). Union Finance Minister, Arun Jaitley announced the implementation of Namami Gange on 10 July 2014.

It is a flagship programme under the Union Government. The main pillars of the Namami Gange have been discussed below:

Under the National Ganga River Basin Project, World Bank has approved funds to the tune of US $ 600 million for development of Infrastructure projects along river Ganga. The loan would be for a period of five years, till December 2026. The first World Bank project had assisted in building important infrastructure for management of Sewage water in 20 hotspots along River Ganges. The most recent funds provided by World Bank will help in building infrastructure along important tributaries of River Ganges like River Yamuna and River Kali.

India had also joined hands with Germany to rejuvenate Ganga as the country’s Ministry of Water Resources and German International Cooperation (GIZ), owned by the German Federal Government signed an agreement in this regard. In August 2017, Germany officially sealed an aid deal of ₹900 crores during a meeting between its Ambassador to India Dr Martin Ney and Uttarakhand’s chief minister Trivendra Singh Rawat. Overall, the EU state has pledged the assistance of 120 million Euros, or ₹100 crores, to the state of Uttarakhand, where the river originates.

Candidates can refer to the Previous Year’s Environment and Ecology Questions in UPSC Mains GS 3, from the linked article.

The very first initiative to clean Ganga river started with Ganga Action Plan-I in 1986. When a new Government was elected with Narendra Modi as Prime Minister, Namami Gange Project was launched in Mid of 2015. The programme was allocated Rs 20,000 crore with the objective of cleaning Ganga by 2019. Although there is progress, due to the herculean task involved in cleaning River Ganga, the mission will consume more time to achieve its objectives.

Candidates should follow the latest developments in Current Affairs related to other government schemes for their UPSC 2022 preparation.