The environment is showing signs of this degradation. The air quality index touches alarmingly dangerous levels frequently; contamination of groundwater is a stark reality; water tables are receding; oceans are rising; the air is being polluted by vehicles and industries; plastic waste is clogging the entire ecosystem and landfills are becoming a part of the skyline of our Cities. Frequent floods, drought, abrupt weather cycle, crop pattern changes, receding coastal areas are some of these red flags glaring at the humanity.

It is the collective responsibility to work together for ensuring sustainable development. There is an economy around the environment, and also the economy, in general, is impacted by climate change and its mitigation.  Sustainability and development need to go hand in hand.

Climate change is real. The world recognised it and adopted a comprehensive agreement in Paris. It is essential that there are efforts from across the globe for implementation of the Paris Agreement.

Kayakalp initiative of the Ministry of Health and Family Welfare began in 2015 with the aim of improving infrastructure upkeep, hygiene and sanitation, and infection control practices in Central Government institutions and public health facilities in all States and UTs.

Mahatma Gandhi was concerned about Sanitation which was also a part of his Sathyagraha campaign.

Chapter 4: Sustainable Sanitation in the Cities

The Sustainable Development Goals (SDGs) place significant emphasis on sanitation, cleanliness and hygiene. There is significant evidence globally that better sanitation; hygiene and cleanliness will help in effective control of various vector-borne diseases, parasite infections, and nutritional deficiencies. There have been studies linking cleanliness and hygiene with a reduction in gastrointestinal diseases, psychological issues and allergic conditions.

The Cost of Poor Sanitation: 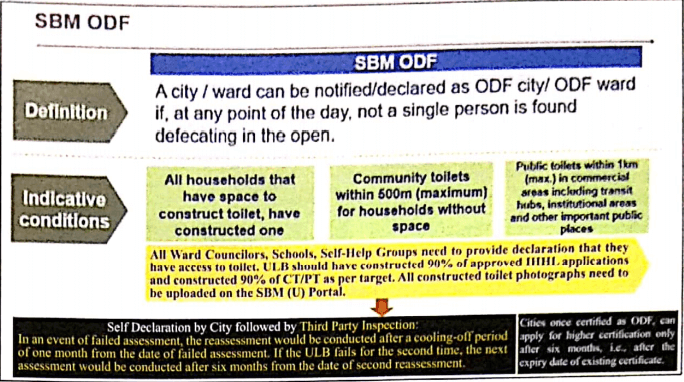 A Graded Approach to Scaling Up and Sustaining Urban Sanitation: 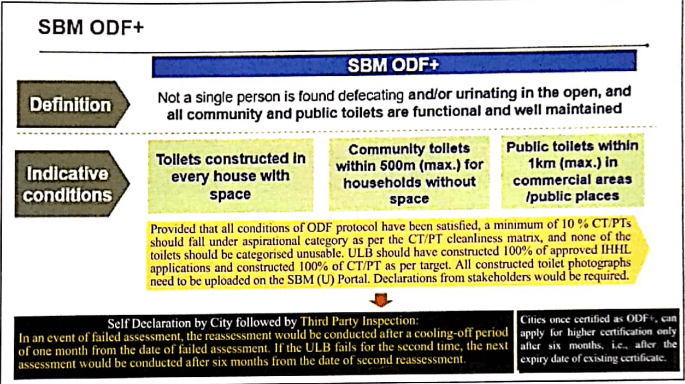 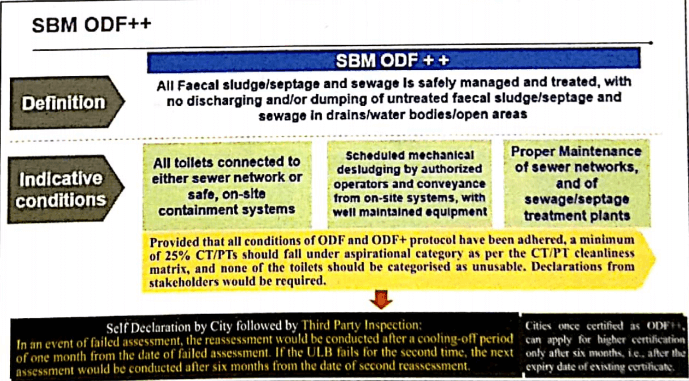 As per the data provided by MoH&FW, we have 1319 cities already certified ODF+ and 489 cities certified ODF++. Under AMRUT mission, significant progress has been made in Faecal Sludge management coverage with 637 projects already completed in Sewerage and Septage Management.

Swachh Survekshan – A Tool for Mission Monitoring and Governance:

Addressing the Challenge of Manual Scavenging and Hazardous Entry

Environment and Community: How Maharashtra is Investing in Women’s Leadership for Sustainable Development in Water – Stressed Areas

Environment and Governance: The Story of Fluorosis Mitigation in Rajasthan

Environment and Intersectionality: Impact of Water and Sanitation Policies on Environmental Health in India.

While safe drinking water as a part of environmental health has long been realised as critical to a healthy life, improved sanitation facility in India has been recognised as essential for providing safe drinking water. This is because people get exposed to Faecal Transmitted Infections (FTI) due to poorly constructed toilets and open defecation.

Policies on Water Supply and Sanitation:

Investing in Retrofitting and Waste Management:

Community Radio specialises in providing local information to the local people. It can play an important role in disaster risk reduction, pre-disaster preparedness and mitigation through raising awareness. The Ministry of Information and Broadcasting is committed to developing a vibrant Community Radio movement through participation, involvement and ownership of the local community for greater information dissemination and further empowerment of the people.

During forest fires in summer, landslides in monsoon, etc. rural communities constantly struggle and their isolated situation does not help the cause. Community radio has the power to organize and provide information and connect these communities to the much-needed aid and relief. Also, since the content is in the local dialect it can help curb miscommunication and misinformation in times of panic.

Global warming with the burgeoning anthropogenic greenhouse gas (GHG) emissions (400 parts per million from 280 ppm CO2, emissions of the pre-industrial era) has been altering the climate, eroding the ecosystem productivity and sustenance of water, thus affecting the livelihood of people.

Water and food security towards sustainable and healthy living:

Agriculture of today is witnessing several sustainable initiatives by farmers to improve farming techniques and to prop up their livelihoods and income. The government too has, in a way, recognized this changing landscape of agricultural development. The recent conferment of Padma Shri awards to 12 such farmer-leaders in 2019 is a case in point.

Electronic industry is one of the world’s largest and fastest growing manufacturing industries. It has provided some leverage to the socio-economic and technological growth of the developing society of India. However, it creates new environmental challenges- “Electronics Waste” or “e-waste” that consists of obsolete electronics devices. Solid waste management, which is already a critical task in India, is becoming more complicated by the invasion of e-waste, particularly computer waste.

Effects on Air, Water, and Soil:

Some Solutions Addressing the Issue:

With the advent of the Industrial Revolution in the 19th Century, the world moved fast towards better living- terming it as growth – but at the same time, degrading the purity of nature in all forms.

Melting down plastic waste to repurpose it into useful new items is one of the ways of reducing the plastic in oceans and landfills. Initiatives are being taken to use plastic waste out of landfills in building roads. The plastic road is a circular product based on recycled plastics. It has significantly smaller carbon footprint than traditional road construction materials used because of its long lifespan and reduced transportation of materials involved.

Other uses of plastic:

Initiatives taken by the government to keep a check on plastic usage:

A voter is the central unit of Democracy. National Voter’s Day connects voters with the electoral process and renews both, their relevance and contribution to the democracy.