The Indian leopard (Panthera pardus fusca) is a subspecies of leopard native to the Indian subcontinent.

Along with the Bengal Tiger, Asiatic Lion, Snow leopard and clouded leopard, it’s one of the big cats inhabiting the forests of India

This article will give further details about the Indian Leopard within the context of the Civil Services Examination.

Characteristics of the Indian leopard

The Indian leopard has a well-developed tail, short ears and strong legs. Their eyes are yellowish grey with light grey ocular bulbs. It’s spots fade towards the underbelly and the lower part of the legs. The white-tipped tail is 60-100 cm long. Its rossetts are the most prominent among all leopard subspecies of Asia

Its fur colour varies as per geography. They are more pale in arid regions, gray in colder climates and golden in colour in rainforests.

Further characteristics of the Indian Leopard is given in the table below:

Characteristics of the Indian Leopard 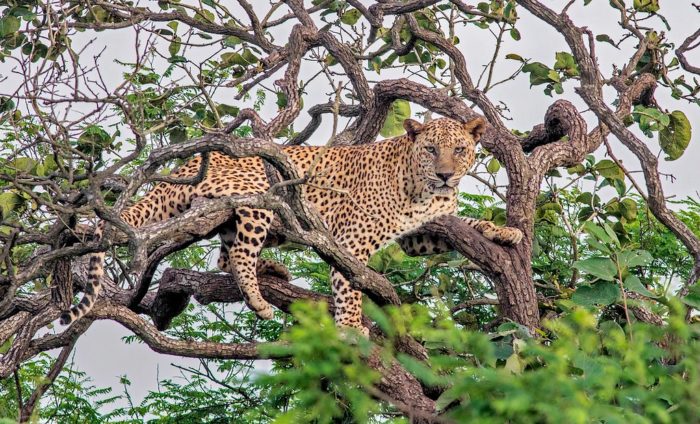 Behaviour and Hunting Traits of the Indian Leopard

The Indian Leopard is solitary and active at night. It is skilled in climbing trees from where it rests, observes its area and feasts on its prey. Along with being a good swimmer (though not as good as the Bengal Tiger), the leopard can run at the speed of 58 kms per hour and jump upto 3 m vertically.

Where tiger populations are high, leopards are not commonly found. This is due to the fact that the tiger becomes the apex predator in the region driving them off to locations with the least tiger population, at times near human settlements. Examples of this is Nepal’s Bardia National Park and Sariska Tiger Reserve

In Gujarat’s Gir National Park, the Indian leopard is cohabited with the Asiatic lion.In the Himalayas, it also exists along with the snow leopard up to an altitude of 5,200 m (17,100 ft), but the leopard usually prefers forested habitats located at lower altitudes compared to the the snow leopards.

Conservation of the Indian Leopard

The Indian Leopard Population stands at 12,172 to 13,535 individuals. They inhabit India’s forest landscapes.

The Indian Leopard is listed as ‘Vulnerable’ on the IUCN Red List. Their population has been on the decline for the following reasons:

Of all the threats to the Indian Leopard population, poaching is the most prominent. If a haul consisting of illegal tiger skins is busted, chances are that there will be leopard skins in that same haul as well.  The state of Madhya Pradesh has the largest population of Indian Leopards at 3241

Despite such factors in play, efforts to preserve the leopard population in India is still underway. More rescue and rehabilitation centres are being planned. But wildlife conservation experts are of the opinion that this may not be enough. Long term solutions such as raising awareness among humans, land use of grazing patterns and implementing sustainable development practices will be far more effective.

Which state has highest leopard in India?

Among the states, Madhya Pradesh with 3,421 leopards has the highest number of leopards recorded – which is about 26 percent of the total number estimated in the country, according to the report.

What are the Charecteristics of an Indian Leopard?

The Indian leopard has strong legs and a long well-formed tail, broad muzzle, short ears and small, yellowish grey eyes, light grey ocular bulbs. Its coat is spotted and rosetted on a pale yellow to yellowish-brown or golden background, except for the melanistic forms; the spots fade toward the white underbelly and the insides and lower parts of the legs.