A Thangka painting (alternatively spelt as hangka, tangka, thanka, or tanka) is a Tibetan Buddhist painting on cotton, silk applique that usually depicts a Buddhist deity or mythological scenes

Thangka serve as important teaching tools depicting the life of the Buddha, various influential lamas and other deities and bodhisattvas

Tibetan Buddhist paintings have their origins in early Buddhist paintings that today survive in a few places like the Ajanta Caves and the Mogao Caves in China. These cave paintings are repositories for early Tibetan paintings on cloth. It was here that the thangka form of painting developed alongside Buddhist wall paintings

Most Thangka paintings were commissions of individuals. These finished commissions were given to a monastery be retained by those who commissioned them

Surviving thangkas date back from the 11th century. At least 20 are known to be from both the 11th and 12th century.

Thangka paintings were created in those regions where Tibetan Buddhism was practiced including Mongolia, Ladakh, Sikkim, Arunachal Pradesh and parts of Himalayan India.

For more NCERT notes on UPSC Art and Culture, visit the linked article.

Thangka paintings are important tools to depict Buddha and his teachings as well as that of other deities and bodhisattvas. The most prominent subject is the Bhavachakra (Wheel of Life) which is how the Art of Enlightenment is visually represented.

Today printed iterations and poster size of the thangka paintings are commonly used for prayers and decoration. Many paintings were produced in sets, though they have become separated as time went on.

Thangka paintings are teaching tools that describe historical events. Devotional images act as the centerpiece during a ritual or ceremony and are often used as a medium for prayer requests. Overall, religious art is used asmeditation tool to further walk the path of enlightenment.

A Buddhist Vajrayana devotee uses a thangka image of the meditation deity (yidam) as a guide by visualising himself as the deity, thus evoking the qualities of the Buddha within them.

To know more in detail about Mural Painting traditions of India visit the linked article.

Process in Making and Types of Thangka Paintings

On the basis of technique and material, tangkas can bet divided into the following categories:

Usually thangkas are small, painted in an area between 20 to 50 centimetres in height. There are even bigger thangkas of the appliqué category that are unrolled for particular religious occasions. They are likely to be wider at 60ft or more. There are also average sized thangkas that were designed for altas or for display in temples

Tangkas are painted on cotton or silk. The most common process is by making a loosely woven cotton that has widths from 0 to 58 cm. The paint consists of pigments in a water soluble medium of animal glue. Both mineral and organic pigments are in use. 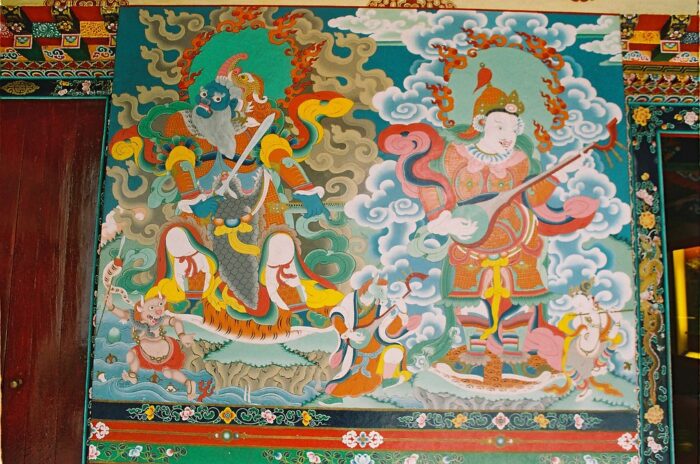 Who painted the Thangka paintings?

Most of the artists who painted the Thangka were monks although laymen painters also were employed on certain occasions.

Can Thangkas be classified as a tapestry?

As per many sources of Asian art, thangkas are categorised as “tapestry” but they do not meet the standard definition of tapestry as the images created by weaving a single piece of fabric are extremely rare.