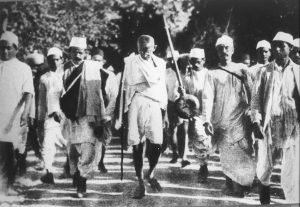 Mahatma Gandhi started the 24-day march from his Sabarmati Ashram to the coastal town of Dandi to produce salt from the sea and defy the salt law. This is known as the Dandi March or the Salt March.

This is an important event in India’s struggle for independence, and so is a relevant topic for the IAS exam.

Get notes on modern Indian history for the UPSC exam in the link.