1. The quarrel over Kuril Islands

Context: TheKuril Islands situated between the Sea of Okhotsk and the Pacific Ocean are under dispute as both Russia and Japan claim sovereignty over them.

What are the Kuril Islands/Northern Territories? What is the Kuril island dispute?

Nut Graf
Japan’s policy shift on the Kuril Islands will embitter bilateral relations with Russia while advancing the possibility of its two neighbours, China and Russia, coming together against it which in turn is a cause of concern for India.

1. The goal of an energy-secure South Asia

Syllabus: GS-2, Effect of policies and politics of developed and developing countries on India’s interests.

Mains: Need and significance of energy-security in South Asia

Context: This article talks about the need and significance of energy security in the South Asia region.

Significance of Energy Security in the development of South Asia:

What is Household Consumer Expenditure?

Nut Graf
The Government’s actions, including the delayed release of critical jobs data, have dulled the perception of free-market and transparent democracy. Surveys on such parameters need to be conducted more frequently for more effective policy actions informed by ground realities.

Syllabus: GS2: Polity and Governance: Government policies and interventions for development in various sectors and issues arising out of their design and implementation.

Context: This article discusses the recommendations of the United States Commission on International Religious Freedom (USCIRF) on religious freedom in India.

Context: The Centre released data on Monitoring the Indian Economy. 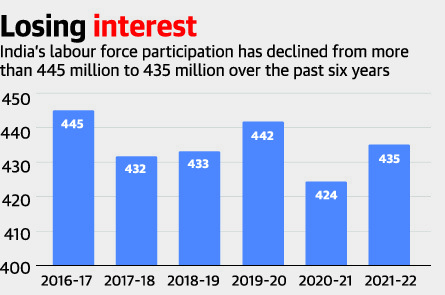