1. CJI recuses himself from Andhra-Telangana case

Chief Justice of India (CJI) N.V. Ramana recused himself from hearing a petition filed by Andhra Pradesh accusing Telangana of depriving its people of their legitimate share of water for drinking and irrigation.

2. RTE entitlements to be paid through cash transfers

The Centre plans to pay students their Right to Education (RTE) entitlements in the form of cash transfers as part of a revamp and extension of its flagship Samagra Shiksha Scheme.

Virtually 50% of the ₹2,200 crore allotted for completing the ongoing MPLADS projects in 2020-21 have lapsed. 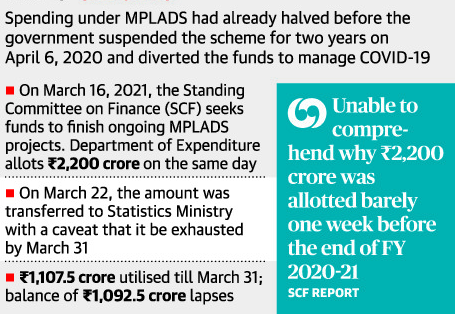 Key Provisions of the bill:

Appeals against the Commission’s orders will lie with the National Green Tribunal.

1. No fundamental right to strike

Recently, the Minister of Defence introduced the Essential Defence Services Bill, 2021, in the Lok Sabha.

Instances where strikes were made illegal:

This is not the first time that strikes by government employees are being made explicitly illegal by the government.

The author (IPS officer in Chhattisgarh) opines that there is no fundamental right to strike under Article 19(1)(a) of the Constitution. Strikes cannot be justified on any equitable ground. Though the employees of OFB have threatened to go on strike, Parliament, which has the right to restrict even the fundamental rights of the armed forces, is well within its right to expressly prohibit resorting to strike.

2. Clash of cultures in a federation

The article brings to light the clash between the homogenising tendency of the union in India and EU with the particularism unique to individual states.

Conflict between the Union and its constituents:

It is this division of powers in India and the EU that brings the unions into conflict with their constituent parts.

Latest controversy in the EU:

Cooperative federalism is where state and centre cooperate to frame, implement and regulate the national policies in the larger interest of the public and the growth of the economy. Yet, the clash of cultures has reduced the term ‘cooperative federalism’ to an oxymoron.
Category: EDUCATION

1. A language ladder for an education roadblock

This topic has been covered in NEP: BTech in Regional Languages: RSTV – Big Picture Discussion

In this global context, it is ironic that India has an overwhelming majority of professional courses being taught in English. In science, engineering, medicine and law, the situation is even bleaker, with native language courses being practically non-existent. Fortunately, the NEP outlines the road map, demonstrating the means to protect our languages while improving the access and quality of education.

Read more on INS Vikrant covered in the linked article.