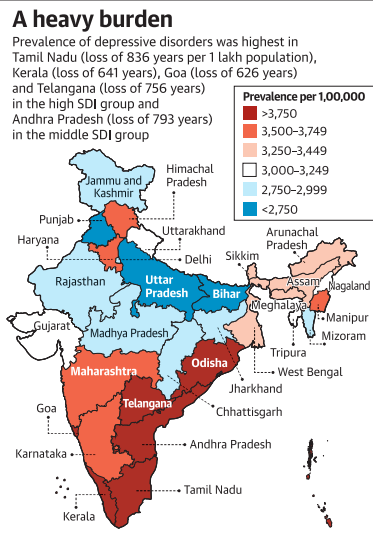 Tamil Nadu, Kerala, Telangana, Karnataka and Andhra Pradesh account for a higher prevalence of mental disorders that manifest primarily during adulthood in depression and anxiety, according to the first comprehensive estimates of disease burden attributable to mental health from 1990 prepared by the India State-Level Disease Burden Initiative and published in the Lancet Psychiatry.

This topic has been covered in 21st December Comprehensive News Analysis. Click here to read.

Aviation consultancy Centre for Asia Pacific Aviation (CAPA) estimates a full-year loss of $500-600 million for Indian carriers primarily due to a sharp fall in airfares on some of the most profitable routes as the airlines mounted additional capacity in a bid to capture coveted airport slots owned by the now defunct Jet Airways. 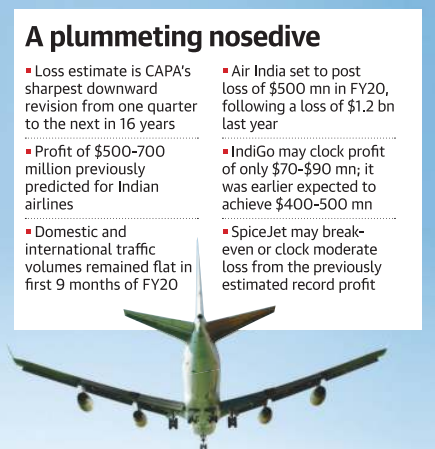 The consultancy recommends that the government review the challenges before the sector following the demise of Jet Airways and subject airlines to an annual review where they may be required to prove that they have sufficient cash reserves to continue flying.

These are all portents of danger, and call for a great deal of introspection. They merit a calibrated response. At this juncture, it may be worthwhile to quote Winston Churchill ‘the price of greatness is responsibility’. The ones in authority must be answerable to the question, “Is India acting responsibly?”

2. A decision without forethought

Prime Minister Boris Johnson’s Brexit deal has been passed in the British Parliament. It is now almost certain that the country would exit the European Union (EU) on or before the current deadline — January 31, 2020.

The new scenario could strengthen demands in Belfast for unification with Dublin, potentially imperilling the U.K.’s constitutional integrity. Brexit has strengthened calls for a second referendum on independence by the Scottish National Party, which won a big majority in the UK elections. The uncertainty over Brexit is now over. But the uncertainty on how Brexit will happen still remains. Mr. Johnson should be mindful of the speed-breakers. If not, the economic and political costs of Brexit could be huge.

1. Aadhaar to be made mandatory for GST

China has said that the U.S. is turning the cosmos into a “battlefield”, after Washington announced a new military arm called the Space Force. The Space Force will be the sixth formal force of the U.S. military, after the Army, Air Force, Navy, Marines, and Coast Guard.

As Punjab continues to reel under cold wave conditions, the State government has decided to change the timings for all schools.

What is a cold wave?

The National Investigation Agency (NIA) is a central counter-terrorism agency under the Ministry of Home Affairs, Government of India.

The Defence Research and Development Organisation has successfully conducted twin tests of the Quick Reaction Surface to Air Missile (QRSAM) from the Integrated Test Range in Chandipur off the Odisha coast.

The Eurasian Economic Union (EAEU) currently comprises 5 member states, which are party to the founding treaties of the EEU and thereby subject to the privileges and obligations of membership. Syria is not a member.

PVTG is not a Constitutional category. It is a government of India classification created with the purpose of enabling improvement in the conditions of certain communities with particularly low development. A sub-category of Primitive tribal group was created on the recommendations of the Dhebar Commission. 75 tribal groups have been categorized categorized by Ministry of Home Affairs as Particularly Vulnerable Tribal Groups (PVTG)s.

NIA acts as the Central Counter-Terrorism Law Enforcement Agency. It investigates and prosecutes on offences on atomic and nuclear facilities in the country. The officers of the NIA have the same powers as other police officers in relation to the investigation of such offences, across India. The officers of the NIA will have the power to investigate scheduled offences committed outside India, subject to international treaties and domestic laws of other countries.