The Government of India initiated Operation Flood known as the White Revolution after witnessing the huge success of the Green Revolution that resulted in an immense increase in the production of wheat and rice. White revolution in India started with a motive of increasing milk production to make the country one of the largest producers of milk in the world.

You can also read about the following Agricultural Revolutions in India:

What is the White Revolution?

Operation Flood is the program that led to “White Revolution.” It created a national milk grid linking producers throughout India to consumers in over 700 towns and cities and reducing seasonal and regional price variations while ensuring that producers get a major share of the profit by eliminating the middlemen. At the bedrock of Operation Flood stands the village milk producers’ co-operatives, which procure milk and provide inputs and services, making modern management and technology available to all the members.

The White Revolution or Operation Flood is an important topic from exams point of view. Candidates preparing for competitive exams like UPSC exam, bank exams, SSC, RRB, Insurance exam or other Government exams must keep abreast with the topic.

Aspirants of UPSC exam should prepare Operation Flood or White Revolution in India topic for Static GK section and Geography GS I Paper.

During the year 1964-1965, the Intensive Cattle Development Programme was introduced in India in which the cattle owners were provided with a package of improved animal husbandry for promoting the white revolution in the country. Later on, the National Dairy Development Board introduced a new programme named “operation flood” to increase the speed of the white revolution in the country.

Operation Flood started in the year 1970 and was aimed to create a nationwide milk grid. It was a rural development programme initiated by NDDB – National Dairy Development Board of India.

Objectives Of White Revolution in India

Village milk producers cooperatives laid the foundation of the operation flood. With the optimum use of modern technology and management, they procured milk and provided the services.

White Revolution had the objectives as stated below:

When Operation Flood was implemented Dr Verghese Kurien- the chairman of the National Dairy Development Board. With his sheer management skills, Dr Kurien pushed forward the cooperatives to empower the revolution. Thus, he is considered the architect of India’s ‘White Revolution’.

Several big corporations participated and empowered the revolution that transformed this Operation Flood in India into the White Revolution. AMUL – Anand Milk Union Limited a Gujarat based cooperation was the engine that drove the success of Operation Flood Programme.

Different Phases of the White Revolution

Operation Flood was launched in three – phases that are discussed below:

Phase I started from 1970 and lasted for 10 years i.e. till 1980. This phase was financed by the sale of butter oil and skimmed milk powder donated by the European Union through the World Food Program.

For the successful implementation of the programme, certain aims were defined in the initial stage of Phase I. One such aim was the improvement in the marketing strategy of milk in the metropolitan cities to accomplish the goals.

Phase II lasted for five years from 1981 to 1985. During this phase, the number of milk sheds increased from 18 to 136, milk outlets were expanded to about 290 urban markets, a self-sustaining system was set up that included 4,250,000 milk producers spread across 43,000 village cooperatives. The production of domestic milk powder increased from 22,000 tons in the year 1980 to 140,000 tons by 1989, and the sale of milk also increased by several million litres a day due to direct marketing of milk by the cooperatives. All of the enhancements in production were simply because of the dairies set up under Operation Flood. 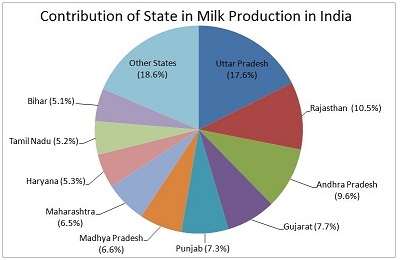 Phase III also lasted for almost 10 years i.e. 1985-1996. This phase enabled the dairy cooperatives to expand and gave a finishing touch to the programme. It also strengthens the infrastructure required to procure and market increasing volumes of milk.

Towards the end of White Revolution or Operation Flood, 73,930 dairy cooperatives had set up that links more than 3.5 crore dairy farmer members. At present, due to the White Revolution, there are several hundred Cooperations in India that are working very efficiently. Hence, the revolution is the cause of the prosperity of many Indian villages.

Knowing about the White Revolution in India, Operation Flood, NDDB, Features, objectives and significance of White revolution is important and holds relevance in various competitive exams.

Candidates preparing for UPSC 2022 must check the important links given below: