1. Inequality Kills: A study of the new OxFam report

Syllabus: Inclusive Growth and issues arising from it

How has the pandemic aggravated global inequality?

Higher impact on the vulnerable:

Impact on social trust in the society:

Nut Graf
The increasing economic inequality would have adverse economic, social, political as well as environmental impacts on the global community. Unless strong measures are taken by governments to reverse the widening inequality, the achievement of goals envisaged under the sustainable development goals by 2030 would be impossible.

Syllabus: Effect of policies and politics of developed and developing countries on India’s interests.

Mains: Geopolitical Challenges and Risks for India in 2022

In this article, the author examines the uncertainties and impermanence India would face in the context of domestic and geopolitical world affairs for the year 2022.

What are the Geopolitical Challenges and Risks for India in 2022? 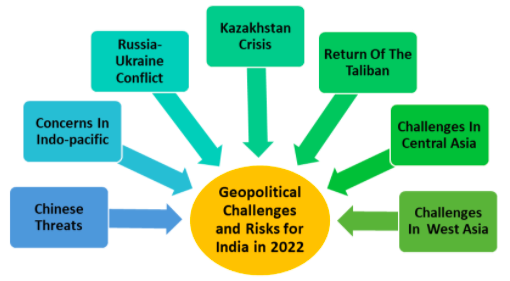 Nut Graf
Facing a host of unprecedented challenges, India’s foreign policy in 2022 should demonstrate more flexibility in managing contradictions and find rational answers to questions that cannot be ignored for long.

1. Just what the doctor ordered for the livestock farmer

Syllabus: Issues and economics of animal-rearing.

This article discusses the challenges in accessing veterinary services as the country’s livestock is concentrated in rural and remote areas.

What are the issues with livestock in rural livelihood?

What are the Government Measures?

During the novel coronavirus pandemic, India witnessed innovations by start-ups that provided video consultation sessions between livestock farmers and veterinarians, along with apps that provide detailed information to farmers on livestock health and nutrition. Thus, there is a great deal of scope for innovations and intervention by the private sector in the context of veterinary services in rural areas. Further, with the growing prevalence of the Public-Private Partnership (PPP) model, veterinary services are poised to generate higher returns on investment.

Nut Graf
While the latest government measure of establishing Mobile Veterinary Units will go a long way in improving access to veterinary services for rural livestock owners, more can be achieved in this regard in the form of innovations and interventions from public-private partnerships leading to desirable outcomes for the rural agrarian sector.