Kathak is a prominent ancient Indian classical dance and is thought to have started from the wandering bards of North India known as Kathakars, meaning storytellers. These Kathakars travelled and conveyed stories by means of music, dance and songs akin to the early Greek theatre.

The class created amid the Bhakti development, the pattern of mystical commitment which advanced in medieval Hinduism. The Kathakars convey stories through rhythmic foot movements, hand gestures, facial appearances and eye work. This performing workmanship that consolidates legends from antiquated folklore and awesome Indian stories, particularly from the life of Lord Krishna turned out to be very famous in the courts of North Indian kingdoms. Three particular types of this sort are three gharanas (schools), which generally vary in accentuation given to footwork as opposed to acting, are more acclaimed in particular, the Jaipur Gharana, the Benaras Gharana and the Lucknow Gharana.

The foundations of Kathak are rooted in Natya Shastra, an ancient Sanskrit text written by Bharata Muni.

The three chief sections of a Kathak dance are:

Invocation: where the artist offers his/her prayer or salutation to his/her guru and to god. In the case of Hindu performances, the artist uses mudras (hand gestures) for the same. For Muslim occasions, the artist gives a ‘salami’.

Nritta: pure dance portrayed by the artist. He/she starts with slow and graceful movements of the neck, wrists and eyebrows. This is followed by fast sequences according to ‘bols’. A bol is a short sequence of rhythmic pattern. Here the artist displays energetic footwork also.

Nritya: here the artist showcases a story or theme through gestures, expressions and slow body movements accompanied by vocal and instrumental music.

As Kathak is prevalent both in Hindu and Muslim people group the outfits of this moving frame are made in accordance with customs of the separate groups.

Read about classical dance forms of India in the linked articles below:

A Kathak execution may incorporate twelve traditional instruments depending more on the impact and profundity required for a specific execution. However, a few instruments are commonly utilized as a part of a Kathak execution like the tabla that blends well with the musical foot developments of the artist and regularly emulates the sound of such footwork developments or the other way around to make a splendid jugalbandi. A manjira that is hand cymbals and sarangi or harmonium are additionally utilized frequently. 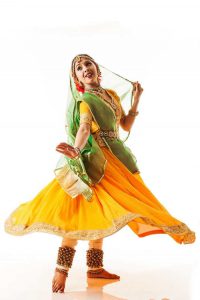 Which State is Kathak from?

Kathak dance originated from Uttar Pradesh (U.P) in North India. This one is derived from the word Katha meaning story, and during the whole dance, the dancers narrate stories through their eyes and expressions.

Why is Kathak important?

Kathak gives emphasis on poses, expressions, grace, hand, eye and body movements, and footwork. This makes your body look younger, lose bodyweight, and brings a lot of excitement in life. Within no time you will discover that you have become more active and full of energy.

When was Kathak invented?

The art of Kathak dancing pays a significant tribute to Indian history and accentuates Indian culture. Kathak actually dates back to 4th century BC where sculptures of Kathak dancers were engraved in written scripts and sculptures in ancient temples.

Who is the God of Kathak?

The stories in Kathak’s performance generally tend to be about the Hindu god Krishna (or in some cases Shiva or Devi), and the stories come from sources such as the Bhagavata Purana, or the Indian Epics.

Which of the following options are true?

D) All the above 4 statements are true.