Odissi Dance originates from the Indian state of Odisha. According to Natya Shastra, ‘Odhra Magadha’ is the earliest form of present-day Odissi Dance. IAS Exam aspirants should know that Odissi is one of the eight Indian Classical Dances.

This article will provide you with relevant facts about Odisha’ dance called Odissi for the IAS Exam (Art & Culture) preparation. 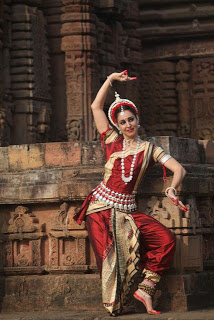 Odissi is a classical India dance form and it originates from the state of Odisha. It is a sensuous and lyrical dance form. Considered a dance of love, it touches on the human and the divine aspects of life. It also touches on the subtleties of life, as well as the mundane.

Odissi can be traced back to a dance style called the Odhra Magadha. This is mentioned as the southeastern style of classical dance, and one of the many varieties of dance in the Natya Shastra.

There is 2nd-century archaeological evidence of Odissi in the caves of Khandagiri and Udayagiri near the city of Bhubaneswar. There is evidence of the continuing tradition of this dance form from the second to the tenth century AD in the form of Buddhist sculptures, Nataraja, tantric images, celestial dancers and musicians in ancient Shaivite temples.

Odissi is a very stylized Indian dance and to some degree depends on the established Natya Shastra and the Abhinaya Darpana.

Odissi nearly takes after the principles set around the Natya Shastra. Outward appearances, hand signals and body developments are utilized to propose a specific feeling, a feeling or one of the nine rasas.

The procedures of development are worked around the two essential stances of the Chowk and the Tribhanga. The chowk is a position emulating a square – an exceptionally manly position with the heaviness of the body similarly adjusted. The tribhanga is an extremely feminine position where the body is diverted at the neck, middle and the knees.

They are the chief repositories of the Odissi Dance. They were called the temple dancers. However, it is said that the Odissi dance form started degenerating when royal kings started employing Maharis in the royal court for dance performances.

Gotipuas is a group of boys who are trained in the Odissi dance form. They perform Odissi dance in temples and some time for entertainment purpose also. It is stated that various Odissi male teachers today belong to the gotipua set of dancers.

The female artists wear brilliantly hued sari typically made of neighbourhood silk decorated with conventional and nearby plans.

The one of a kind element of this dance form is that it fuses Indian ragas, both from south and north that demonstrate the exchange of ideas and execution expressions between the two sections of India.

Also, the Jayadeva’s Gita Govinda is famous for inspiring Odissi Dancers in seeking the themes for dance.