National Institute of Mental Health and Neuro Sciences (NIMHANS) has issued a set of guidelines on the management of mental health issues of the prisoners and prison staff.

In many years, China’s President Xi Jinping became the first Chinese leader to visit Tibet as well as its southeastern border region with India.

Kozhikode is on high alert after a suspected bird flu outbreak has been reported from a private poultry farm.

The Joint Parliamentary Committee (JPC) examining the Personal Data Protection Bill has been given an extension till the Winter Session of Parliament to submit its long-pending report.

2. Drone with explosives shot down

A drone (unmanned aerial vehicle) with explosives was shot down in Jammu.

Read more on the threats posed and the concerns associated with drone usage covered in 28th June 2021 CNA.
Category: ENVIRONMENT AND ECOLOGY

1. SC dismisses plea challenging NGT ban on sale and use of firecrackers

The Supreme Court has dismissed a challenge to a National Green Tribunal (NGT) ban on the sale and use of firecrackers during the COVID-19 pandemic in the National Capital Region (NCR) and all cities and towns where the ambient air quality is in the poor or above categories.

Therefore the Supreme Court intervention in M.K. Ranjithsinh was a much desired ruling promoting the biocentric approach to Environment.

Maharashtra government has announced its decision to become the first state in the country to join hands with Climate Group’s EV100 campaign.

The India Meteorological Department has pointed to significant variations in rainfall across the country. 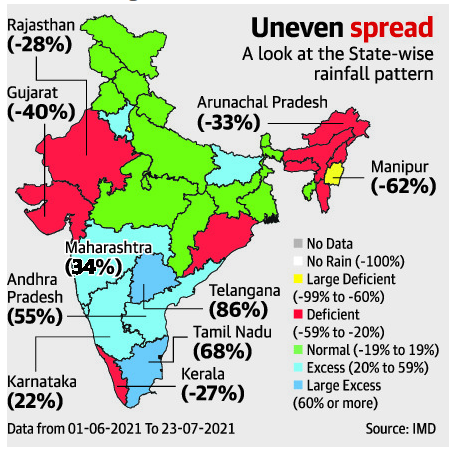 The ongoing monsoon floods across India is unprecedented. India is seeing a threshold rise in widespread extreme rains that cause floods across the country.