The Great Indian Bustard (Ardeotis nigriceps), is a bustard native to the Indian subcontinent. Bustards are large terrestrial birds found in dry grasslands and steppe regions.

Also known as the Indian Bustard, it is among the heaviest of flying birds in existence.

This article about the Great Indian Bustard will be useful in the Environment and Ecology segment of the IAS Exam.

Characteristics of the Great Indian Bustard

Weighing about 15 kgs, the great Indian bustard is easily recognisable by its black cap over a pale head and neck. The male deep sandy buff coloured and its breast band turns black during the mating season. The female is smaller than the male.

Although the Kori bustard (Ardeotis kori) and the great bustard (Otis tarda) are bigger than it, the Great Indian Bustard is the largest flying bird in its native region, standing at about 3.3 ft tall.

The Great Indian Bustard was spread throughout India and Pakistan but now is only found in a few pockets in both the countries. Earlier present in 11 states of India, they are now restricted to the following 6 states today. 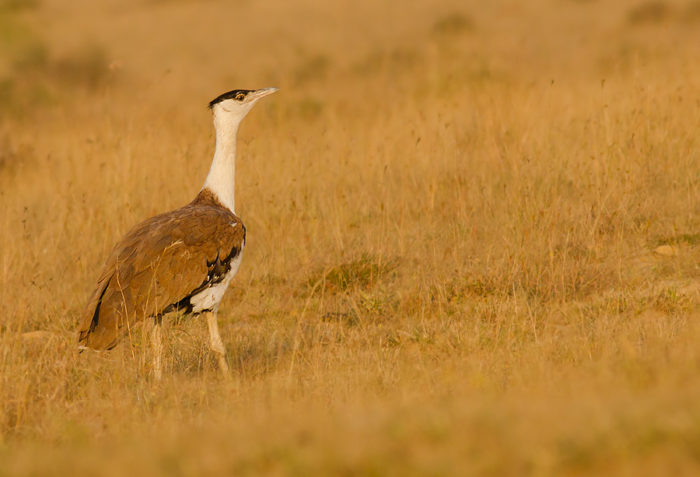 Behaviour and Habitat of the Indian Bustard

The male Indian Bustard is usually solitary but forms small flocks during the winter. The Great Indian Bustard is found in semi-arid and arid grasslands, with tall grass in the open. They are also found near farmlands as well.

The bird is omnivorous preying on insects, rodents and reptiles mostly while also consuming grass seed berries. Near farmlands they also feed on groundnut, millets and legumes pods.

When threatened the females are known to carry their young under the wing when fleeing.

At one point of time the Great Indian Bustard was widespread throughout the dry plains of the subcontinent. Today they number not more than 150 are known to survive as per a 2018 survey as opposed to 250 in 2011. The main threat to the birds is habitat loss and hunting. They are protected under the Wildlife Protection Act 1972.

Due to increased hunting activity in Pakistan the bird is close to becoming extinct there, but conservation efforts in India are in full swing. Many sanctuaries such as the Ranebennur Blackbuck Sanctuary, Desert national Park in Gujarat, Kutch Bird Sanctuary, Great Indian Bustard Sanctuary in Maharashtra and Rollapadu Wildlife Sanctuary have a sizable population of the Indian Bustard.

Apart from housing them in sanctuaries they were also attempts to breed them in captivity in the 1970s but such programs failed. At times, increased agricultural activity and habitat changes in some national parks such as the Ranebennur Blackbuck Sanctuary have also affected the population of the bustards.

Find the list of national parks in India by visiting the linked article.

Certain conservation projects such as ‘Project Great Indian Bustard have been carried to preserve the remaining population of the birds. This project was launched by the State government of Rajasthan during the World Environment Day in 2013. It aimed to identify the exclusive habitat of the Indian bustard and fence them off to prevent human intervention along with providing closed-off breeding enclosures

In 2020 nine eggs collected from the Desert National Park were successfully incubated. If this success can be replicated then the remaining population of the Great Indian Bustard might survive.