The Indian Parliament enacted the Wildlife (Protection) Act in 1972, which provides for the safeguard and protection of the wildlife (flora and fauna) in the country. This is important legislation and forms an integral part of the environment and ecology sections of the UPSC syllabus. 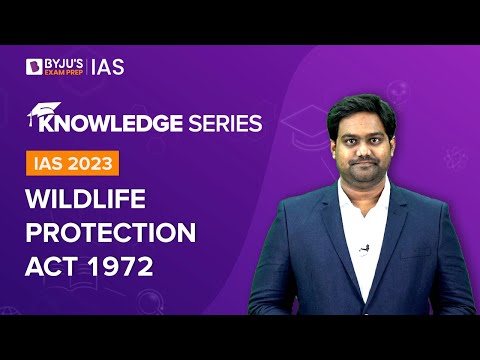 This Act provides for the protection of the country’s wild animals, birds, and plant species, in order to ensure environmental and ecological security. Among other things, the Act lays down restrictions on hunting many animal species. The Act was last amended in the year 2006. An Amendment bill was introduced in the Rajya Sabha in 2013 and referred to a Standing Committee, but it was withdrawn in 2015.

Constitutional Provisions for the Wildlife Act

Article 48A of the Constitution of India directs the State to protect and improve the environment and safeguard wildlife and forests. This article was added to the Constitution by the 42nd Amendment in 1976.

Article 51A imposes certain fundamental duties for the people of India. One of them is to protect and improve the natural environment including forests, lakes, rivers, and wildlife and to have compassion for living creatures.

Need for the Wildlife Protection Act

Wildlife is a part of ‘forests’ and this was a state subject until the Parliament passed this law in 1972. Now it is Concurrent List. Reasons for a nationwide law in the domain of environment particularly wildlife include the following:

This Act provides for the protection of a listed species of animals, birds, and plants, and also for the establishment of a network of ecologically-important protected areas in the country.

There are five types of protected areas as provided under the Act. They are described below.

1. Sanctuaries: “Sanctuary is a place of refuge where injured, abandoned, and abused wildlife is allowed to live in peace in their natural environment without any human intervention.”

2. National Parks: “National Parks are the areas that are set by the government to conserve the natural environment.”

3. Conservation Reserves: The State government may declare an area (particularly those adjacent to sanctuaries or parks) as conservation reserves after consulting with local communities.

4. Community Reserves: The State government may declare any private or community land as a community reserve after consultation with the local community or an individual who has volunteered to conserve the wildlife.

5. Tiger Reserves: These areas are reserved for the protection and conservation of tigers in India. They are declared on the recommendations of the National Tiger Conservation Authority.

The amended Wildlife Act doesn’t allow any commercial exploitation of forest produce in both wildlife sanctuaries and national parks, and local communities are allowed to collect forest produce only for their bona fide requirements.

Schedules of the Wildlife Protection Act

There are six schedules provided in the Wildlife Protection Act. They are discussed in the table below.

How many Schedules are there in the Wildlife Protection Act 1972?

There are six schedules under the Act.

In which state Wildlife Protection Act is not applicable?

The Act is applicable throughout India.

What steps have been taken by the government to conserve wildlife?

The government enacted the Wildlife (Protection) Act in 1972 which laid down a comprehensive set of rules and regulations with respect to the protection of wildlife in India. It laid down the provisions for the setting up of national parks, wildlife sanctuaries, etc. Project Tiger is being implemented which has caused the dwindling tiger population to increase. The country saw a 30% rise in the tiger population from 2010 to 2014.

What are the major threats to wildlife?

Some of the major threats to wildlife are:
Habitat destruction/degradation/fragmentation
Overexploitation of habitat resources
Hunting
Poaching
Climate change
Pollution

How does the extinction of species affect the environment?

Every living thing on this planet has a role to play in the ecosystem and the food chain. The extinction of any one species will have an impact on forests, cause loss of food for certain species, affect the way diseases travel in the animal world, etc.