The Law Ministry has informed the Lok Sabha that it has a proposal from the Election Commission (EC) to link the Aadhaar card with the Election Photo Identity Card (EPIC) to prepare an error-free electoral roll.

India and Myanmar were the subjects of discussion at a hearing in Washington organised by an independent bipartisan federal government commission, the U.S. Commission on International Religious Freedom (USCIRF).

India has become one of the world’s least free democracies, according to the Freedom in the World 2020 report – a global survey.

The report treats “Indian Kashmir” as a separate territory, which saw its total score drop from 49 to 28 this year, moving it from a status of “Partly Free” to “Not Free”.

The government has put private sector lender Yes Bank under moratorium till April 3, 2020 and capped deposit withdrawal at Rs. 50,000 after a severe deterioration of the bank’s financial position.

Why is Yes Bank put under moratorium?

After taking into considering these developments, the Reserve Bank came to the conclusion that in the absence of a credible revival plan, and in public interest and the interest of the bank’s depositors, it had no alternative but to apply to the Central Government for imposing a moratorium under Section 45 of the Banking Regulation Act, 1949.

With the deadline approaching for the biggest-ever amalgamation scheme approaching, eight state-owned banks have announced swap ratios for the proposed mergers. 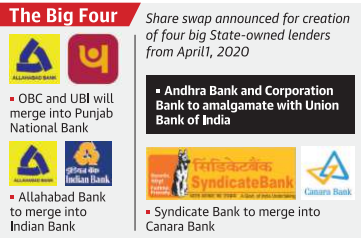 According to the law, disaffection includes disloyalty and all feelings of enmity. However, disapprobation (criticism) of the measures or administrative action of the government to obtain their alteration by lawful means is not an offence.

It is classified as “cognisable” and “non-bailable” — the accused cannot get bail as a matter of right, but is subject to the discretion of the session’s judge.

And what is not sedition?

Arguments against Section 124A

Arguments in favour of Section 124 A

How can we tackle this problem?

While these new tools may be considered efficient – and perhaps necessary during a health crisis – they have prompted concerns about privacy.

According to the World Health Organization (WHO) “Disabilities is an umbrella term, covering impairments, activity limitations, and participation restrictions”.

Disability is thus not just a health problem. It is a complex phenomenon, reflecting the interaction between features of a person’s body and features of the society in which he or she lives.

A look at key stats

In terms of participation in the labour market, persons with disabilities are an underemployed group of the workforce.

The Central Board of Trustees of the Employees’ Provident Fund has reduced the interest rate on provident fund deposits from 8.65% to 8.5%.

A collective of economists and social scientists has published a joint statement demanding that data collection commissioned as part of updating the National Population Register (NPR) be stopped and that it be de-linked from the ongoing Census 2021 data-gathering exercise.

This issue has been covered in 4th March 2020 Comprehensive News Analysis. Click here to read.

In the Lok Sabha, while the Speaker is empowered to place a Member under suspension, the authority for revocation of this order is not vested in him/her. It is for the House, if it so desires, to resolve on a motion to revoke the suspension. Unlike the Speaker, however, the Rajya Sabha Chairman does not have the power to suspend a Member.

There are 12 Major Ports in the country. These are – Kolkata (including Dock complex at Haldia), Paradip, Visakhapatnam, Kamrajar (Ennore), Chennai, V.O. Chidambaranar (Tuticorin) on the East Coast and Cochin, New Mangalore, Mormugao, Jawaharlal Nehru, Mumbai and Kandla (Deendayal Port) on the West Coast.