A nine-judge Bench of the Supreme Court declared that superior courts enjoy untrammelled power to take up any cause to do complete justice.

The issue has been comprehensively covered in 15th November 2019 Comprehensive News Analysis. Click here to read.

You can watch a video lecture on the Sabarimala Case and the review petition below: 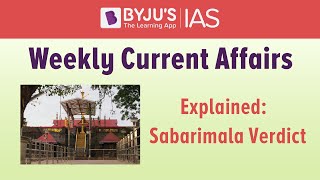 Nepal summoned the Indian envoy and handed a diplomatic note of protest over the construction of a link road that will reduce travelling time from India to the pilgrimage zone of Kailash Mansarovar in China’s Tibet.

This Issue has been covered in 8th May 2020 PIB Summary and Analysis. Click here to read.

China has threatened to retaliate against a U.S. rule that tightens visa restrictions on Chinese journalists, in an escalating row after Beijing expelled more than a dozen American reporters.

1. Andhra Pradesh to send back 13,000 tonne styrene to South Korea

The Andhra Pradesh Government has begun the process of transporting 13,000 tonnes of styrene gas in two consignments of 8,000 tonnes and 5,000 tonnes to South Korea.

A gas leak claimed at least 11 lives and affected thousands of residents in five villages in Visakhapatnam in Andhra Pradesh. The source of the leak was a styrene plant owned by South Korean electronics giant LG.

This issue has been covered in 8th May 2020 Comprehensive News Analysis. Click here to read.

According to the Agriculture Ministry data, COVID-19 has given a boost to e-NAM, the national digital platform for agricultural trade, with the number of connected mandis, or wholesale markets, up 65% since the lockdown.

Ten central trade unions said that they were considering lodging a complaint with the International Labour Organisation (ILO) against the anti-worker changes in the labour laws in some States.

Read more on this issue, covered under the Editorials Segment in the 9th May 2020 Comprehensive News Analysis.

Concept of “force” and “freedom”:

2. Legal but not appropriate

Legality of changes made:

Lack of consultation and scrutiny:

3. The need for a second chamber

History of legislature in India:

Arguments in favour of Rajya Sabha:

With India anticipating a shift of industries out of China in the post COVID-19 world, Karnataka has constituted a special investment promotion task force to attract investments from disenchanted multinational companies [MNCs].

2. Modi asks States to prepare for ramping up economic activity

The Prime Minister has said at a video conference with Chief Ministers that the lockdown would continue in some form or the other but the State governments should send in their plans for ramping up economic activity in green zones for consideration by the Centre.