Data released by the Food Safety and Standards Authority of India (FSSAI) on enforcement of norms has noted that 3.7% of the samples collected and analysed were found unsafe, 15.8% sub-standard and 9% samples had labelling defects. 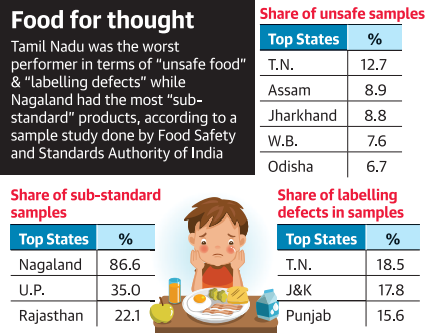 Minister of State for Home has introduced the Special Protection Group (Amendment) Bill, 2019 in the Lok Sabha.

The Union Government has launched the Credit-linked Subsidy Services Awas Portal (CLAP) for Pradhan Mantri Awas Yojana-Housing for All (Urban).

Constitution Day (National Law Day), also known as Samvidhan Divas, is being celebrated in India on 26 November to commemorate the adoption of the Constitution of India.

Findings of a key study:

Longevity of the constitutions:

Functions of a constitution:

The political crisis in the state of Maharashtra.

Treating pre-poll alliances and coalition as a unit:

World Bank’s efforts to address the issue of learning poverty.

3. Won’t do anything to threaten India’s security, says Gotabaya

4. Soon, the way you drive will determine your motor cover

6. U.S. missions against IS in Northern Syria resumed

Conservationists are banking on the cultural icon – Gamosa, to carry forward the message of turtle conservation, with Gamosas woven with turtle images. The Golan Heights is a strategic high ground at the South-western corner of Syria. It is roughly about 1,200 square kilometres (460 square miles) and borders the Sea of Galilee.

The Assam roofed turtle (Pangshura sylhetensis), also known as Sylhet roofed turtle, is a species of the turtle family Geoemydidae found in the Brahmaputra-Meghna drainage in Assam and parts of eastern Bangladesh. It is a freshwater turtle. It is classified as Endangered as per the IUCN Red List.

The Constitution of India derives its ultimate authority from the People of India. In 1976, the Preamble was amended (only once till date) by the 42nd Constitutional Amendment Act. Three new terms, Socialist, Secular, and Integrity were added to the Preamble. The Preamble is a part of the Constitution.

Which of the given option/s is/are correct?