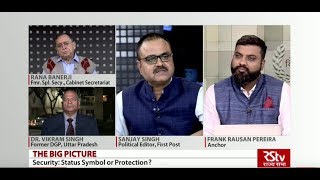 Rajya Sabha TV programs like ‘The Big Picture’, ‘In Depth’ and ‘India’s World’ are informative programs that are important for UPSC preparation. In this article, you can read about the discussions held in the ‘Big Picture’ episode on “Security: Status Symbol or Protection” for the IAS exam.

How is the threat perception decided?

The difference between SPG, Z, and Z+ category of protection level

What is different about SPG: