Difference Between Censure and No-Confidence Motions

Censure and No-Confidence motions are two devices of parliamentary proceedings which are used by the members of Parliament to act according to the rules of the houses. Other than this similarity the two terms are different from each other.

A censure motion can be moved in the parliament or in a state assembly in India. It is moved by the opposition against a specific policy of the government or against a minister or against the whole council of ministers.

A No-Confidence expresses a lack of confidence in the current set up run by the Prime Minister and the council of ministers, if passed in the parliament, then the entire ministry will have to resign. 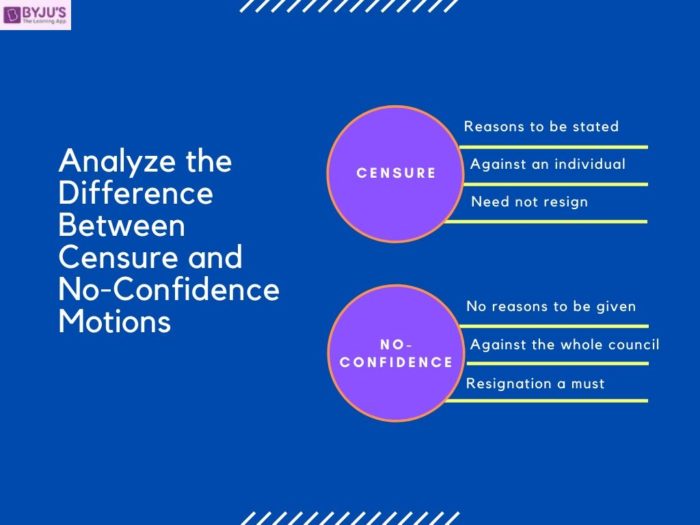 The differences between censure and no-confidence motions are given in the table below:

Differences between Censure and No-Confidence Motion

Censure and no-confidence are important concepts in the polity segment of the UPSC 2022 exam. The following links will be of immense use to candidates in their exam preparation:

Frequently Asked Questions about Censure and No Confidence Motion

What is motion to censure?

The motion to censure is a main motion expressing a strong opinion of disapproval that could be debated by the assembly and adopted by a majority vote.

When is a no confidence motion passed in India?

In India, a motion of no confidence can be introduced only in the Lok Sabha (the lower house of the Parliament of India) and is admitted for discussion when at least 50 members support the motion (under Rule 198 of Lok Sabha Rules, 16th edition). If the motion carries, the house debates and votes on the motion.