Precis Writing is a part of the descriptive paper conducted for various competitive and Government exams under the English Language section.

In this article we shall discuss at length about what is precis writing, the important points that need to be kept in mind while writing a precis, the Dos and Don’ts, followed by some sample precis writing examples and questions.

Candidates can also check the General English for competitive exams page to know more about the English language descriptive and objective type paper.

Before moving to other attributes related to the topic, let us first discuss what precis writing is and what the candidates are supposed to do in a question based on this topic.

What is Precis Writing?

Precis writing is summarising a comprehension in limited words, covering all the important aspects and details of the passage given. 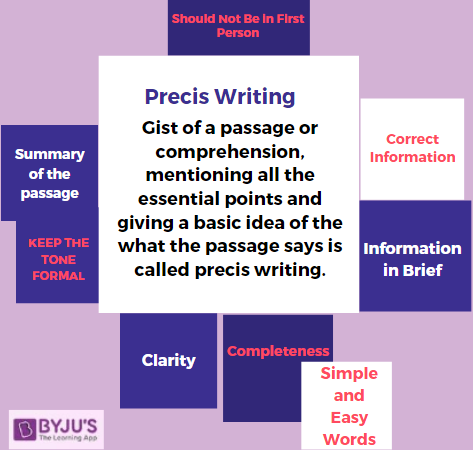 To avoid making any errors in writing a precis, follow a set of rules as mentioned below:

The topic of precis writing is not included in all exams, but the most common exams where this topic is included in the syllabus are SSC exams, RRB exams, etc.

The links given below will help candidates work on their grammar and help them avoid making any grammatical errors while writing a precis:

Important Features of a Good Precis

There are various components that make a good precis. For candidates who have just started their preparation for the upcoming Government exams, knowing the features of a good precis is extremely vital.

Discussed below are a few of the features which shall help you write a good precis:

If a candidate keeps the above-mentioned points in consideration while writing the precis, he/she shall be successful in writing a good precis.

Every year lakhs of candidates appear for the competitive exams conducted in our country. Out of those only a few are able to crack the exam and get appointed. Since most competitive exams have now become computer-based, the descriptive test is still checked offline.

Candidates must know that with thousands of entries that need to be checked, there are certain quick points which the examiner looks for and which may get the maximum marks for your precis writing.

Based on the same information, given below are a few Dos and Don’ts, which a candidate needs to understand before starting to write a precis.

The above-mentioned dos and don’ts will help candidates get a better idea of the concept and also learn the correct approach with which the precis needs to be written.

Given below are a few other links which shall help candidates ace the English language section in the upcoming Government exams:

A paragraph on any topic may be presented in the question paper and candidates must know that they do not need any extra or general information to write the precis. So, even if the topic of the comprehension is not well known by the candidate, he/she must not panic and must pay attention while reading the passage.

Converting what has been written in the passage into your own words and ensuring the reader understands what the paragraph says, is the only job of an applicant while writing a precis.

Given below is a precis writing example, for your reference.

Everybody knows what a “good” man means and how he should be. Our definition of a good man is the one who does not smoke, or drink or avoids the usage of bad language. A good man is ideally expected to converse in front of men as he would in front of women. He is also expected to attend the Church regularly and have correct opinions on all subjects. He has a wholesome horror of wrong-doing and realizes that it is our painful duty to reprimand sin. He is not anticipated to have wrong thinkings and has the authority to protect the young. His duties are not just restricted to the professional front but also needs to spend quality time doing good deeds. He must be patriotic and a keen believer of military training, he should promote industry, must be sober and have virtue among wage earners and their children. He must be a role model for all and it is expected that he leads a way which the younger generation would willingly follow. Above all, of course, his “morals” in the narrow sense must be admirable.

Title: Attributes of a Good Man

The characteristics of a good man are known and he is expected to be religiously profound, must not smoke, drink or use bad language. His behaviour must be the same for all genders and he is expected to be a role model for the young ones. He must know his duties and avoid taking up the path of sin. He must be good not only in the professional space but also help people in need. He must be someone who can be admired and is praiseworthy.

Candidates may note that all the information which was mentioned in the comprehension has been precisely covered in the precis in understandable and easy to read language, along with an appropriate title.

Aspirants can know more about Verbal Ability, the related topics and get some sample questions for the same at the linked article.

For further updates regarding the upcoming Government exams, or the exam syllabus and preparation tips, candidates can search at BYJU’S.

Q.1. What do you mean by precis writing?

Ans. Precis writing is a summary or a gist of a comprehensive passage that is supposed to cover all the details and important aspects of the passage and convey the summary with the use of minimal words.

Ans. To write a good precis, read the passage given, note down the important points and main idea of the passage, use simple and clear words and draft a final precis in precise language.

Ans. Whether asked or not you are supposed to give a title to the precis. The title should convey the core idea of the passage.

Q.4. What should be avoided in precis writing?

Ans. To write a  good precis do not do the following things – do not use any abbreviations, do not give any question in your precis, do not express your own opinion, do not keep it long, and avoid using complex vocabulary.

Q 5. How long can a Precis Writing be?

Ans. The length of a précis varies greatly. A precis can be 100 to 200 words or approximately one-fifth to one-sixth of the length of the original comprehension.