This article will provide concepts and rules of articles with examples in the English Language that hold relevance not just for various competitive exams but in day to day usage as well.

Aspirants of various Government exams are advised to go through the articles (a, an, the) rules carefully as the English language is a part of most of these examinations.

What is an Article?

An article is a word that combines with a noun/s and helps to determine whether a noun in any sentence or phrase is specific or general.

Example: After the long tiring day, the cup of tea refreshed the mind and body.

In this sentence, the use of the article ‘the’ specifies the day that was tiring and that one particular cup of tea that refreshed the body and mind.

What are the Types of Articles in English Grammar?

Let’s go ahead with the important rules of articles to use them correctly in the English language section of the exams or even while speaking in daily lives.

Rules of Articles With Examples

Article Rules for the definite article ‘The’

Rule 1 – The very basic rule of the article says that the article ‘the’ is used before a singular or plural noun, which is specific. It indicates a particular thing/s or person/s in case of a common noun.

The teacher she spoke to at the exhibition was very rude.

He lost all the money borrowed from the lender.

Rule 2 – Article ‘The’ is used when the listener knows what the speaker is talking about.

The mangoes you kept in the refrigerator last night do not taste good.

Did you complete all the homework?

Rule3 – ‘The’ is used to generalize the whole class or group.

The honest are respected.

The beggars are not always needy.

Rule 4 – ‘The’ is used for geographical points on the globe.

Example: The north pole and the south pole can never meet.

Rule 5 – ‘The’ is used for the nouns that cannot be counted.

The water in the Pacific ocean is freezing.

Two robbers stole all the money from the bank.

Rule 6 – ‘The’ is used with geographical nouns, depending on the size and plurality of the noun. ‘The’ must precede the names of oceans, rivers, group of islands, lakes, mountains, countries with united states or islands, etc.

The Ganga is a holy river.

The English Channel is the longest river channel.

However, ‘the’ must not precede the following–

Rule 7 – ‘The’ is mandatorily used for things that are only one of a kind in the universe.

The Sun and the Moon shine bright in the sky.

The books are my favourite (not all the books, just the books talked about)

Books are my favourite (all the books, in general, are favourites)

Check other relevant English language topics given below-

Candidates can watch the video given below on the Article rules and concepts. This will help them to understand the concept and usage even better, along with the application of articles in the English language. 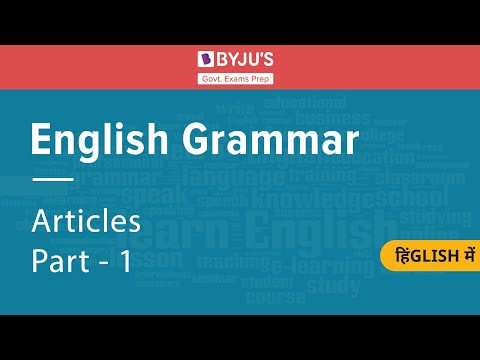 For a better understanding of the formation of words in English and to know the English words that are asked in most of the competitive exams, visit the links provided below:

Article Rule for Indefinite Article ‘A’ and ‘An’

Rule 1 – The article ‘a’ is used before a consonant word or any vowel with a consonant sound.

A man is sitting on the chair.

She goes to a university in Delhi.

Similarly, the article ‘an’ is used before the words beginning with a vowel (a, e, i, o, u) or the letter of a consonant word with a vowel sound.

She is an innocent girl.

He is an honest man.

Rule 2 – A singular common noun always requires an article ‘a’ or ‘an’, but a plural common noun does not require any article or can have ‘the’ to particularise that noun.

I saw an elephant. (Refers to a random elephant)

I saw elephants in a zoo. (No article is required)

I have seen the elephants again before leaving the zoo. (Refers particularly to the elephants of the zoo which were seen earlier.)

Rule 3 – A/An is used to make a Proper noun a common noun. Proper nouns do not take articles but to make them common nouns, a/an is used.

He thinks he is an Abraham Lincon. (not referring to the actual person but someone like him)

She is an Indian. (India is a proper noun but ‘Indian’ is a common noun)

Rule 4 – Indefinite article ‘a’ or ‘an’ is used to refer to numbers sometimes.

The baby is playing with a doll (one doll)

I owe him a thousand bucks. (one thousand dollars)

He drove 120 kilometres in an hour (one hour)

Check English for Competitive Exams for more relevant topics such as rules for articles, conjunctions, list of synonyms and antonyms, idioms and phrases and more.

She is an amazing dancer.

What a nice Villa!

Rule 6 – The indefinite article is used with the determiners (few, lot, most)

There is a little drink in the glass

I have a few guests coming over

When Not to Use an Article

We do not use any article at all in some cases. The articles ‘a’ and ‘the’ are not used in the following cases:

1. When Plural Noun is talked about:

Correct – The girls in my hostel like to play kabaddi. (the sentence is specifically talking about girls of the hostel)

2. When Uncountable nouns are talked about

Correct – Water Scarcity is a problem. (it is uncountable)

Correct – The Water scarcity in my locality is a problem. (talking about specific locality)

Incorrect – There is a water scarcity in my locality. (here again, scarcity is uncountable)

3. When Real Nouns are talked about, i.e. names of people or places

Incorrect – I want to visit the Australia.

Incorrect  – She talks to the Sam for articles.

Candidates can go through the more similar differences between articles-

For more such differences between confused English words, concepts, subjects and topics, candidates cam check 100 difference Between Articles on the given link. 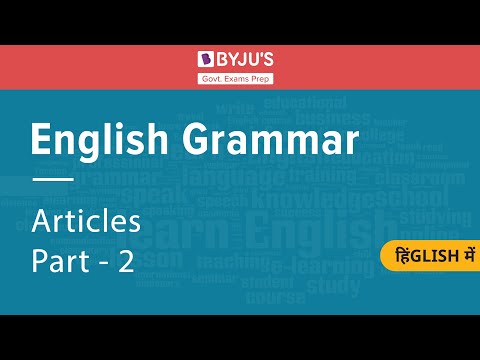 The importance of knowing the rules of articles for the English section of various competitive exams can only be understood by knowing the type of questions asked in the examination, based on the same.

Hence, given below are the samples questions of Articles in the English Language asked in the verbal ability section of various government examinations:

Directions – Pick out the best-suited article for each sentence.

Q1. ____ lilies in your backyard are beautiful.

Article rules are important not just for the objective verbal ability section but also plays a major role in the descriptive section, such as reading comprehension, essay, letter writing, etc.

Candidates who are preparing for the upcoming government exams must carefully go through the concept of Article rules as candidates tend to score the least in the English Language section of these exams.

Aspirants of various government exams can refer to the detailed exam syllabus in the links given below:

For further questions or information regarding competitive exams, study material or best books for preparation, candidates can turn to BYJU’S.

Ans. The articles ‘a’ and ‘the’ are not used when real nouns, uncountable nouns and plural nouns are talked about.

Q.2. What are the Articles in the English language?

Ans. An article is a word used to modify a noun. It is used to indicate whether a noun in a sentence is specific or general.

Q.3. How many types of articles are there in English Grammar?

Q.4. When is Definite Article ‘the’ is used in English?

Ans. Nouns in the English language are preceded by the definite article ‘the’ when the speaker believes that the listener already knows what he (speaker) is referring to.

Q 5. When is the indefinite article ‘a/ an’ used in the English?