Learning root words in English is not only helpful to fetch good marks in the verbal ability section of competitive exams but also help to hone up the English vocabulary skills in general.

English is one of the important sections of various Government exams like Bank, SSC, RRB, etc. and aspirants preparing for these examinations are required to have a good vocabulary to ace this section.

Now, the English language being vast and comprehensive, it is difficult to memorise each and every word and their meaning. So, English root words can help you to understand the meaning of all the words easily.

Therefore, this article will provide the list of root words with detailed explanation. Candidates will also be able to download the root words pdf for convenient preparation.

To understand vocabulary, we need to understand each word and history attached to it. English is considered as a global language because it is a culmination of all popular languages like Spanish, Latin, Greek etc. Learning the root words will make it easy for the aspirants to work out the meaning of the new words as they encounter them.

What is the root word?

A root word is a word that forms the basis of new words by adding affixes (prefixes or suffixes). It is the most basic part of any word.

The basic structure of roots are either affixed or suffixed and then they become a new word. An understanding of the usual root words will help make a good guess about the meaning of newly known words and will, in turn, strengthen your vocabulary.

Check out General English for competitive exams for various conceptual based topics along with their explanations.

Let’s check out various root words in English, their combination and different new words formed by them.

Candidates can go through the video on English Vocabulary – Root Words to understand the concept. 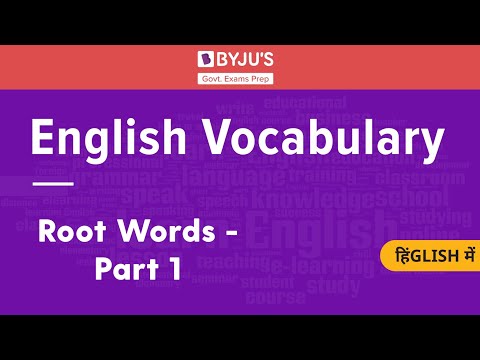 *All the words having ‘mal’ root word gives a negative connotation.

Candidates can check the List of Homophones/Homonyms in the given link to prepare for the English section.

English words formed of it –

You can check the List of Phobias in the given link which is important for the general awareness section as well.

English words containing ‘Fin’ in them –

We can see, the words mean to end or limit something. Examples:  We take a final exam at the end of the course. The one who watches reality TV Shows, see the Finale episode or the final episode of the season.In a race, the Finish line is known as the end of it.

So we can see all the words with root words are associated with love. Did you know the city of Philadelphia actually means the city of brotherly love.

5. Root word – Logy a Greek word, Meaning – to study something

Words formed with the root word ‘logy’ are –

7. Root word – Fact – coming from the Latin language – Meaning – something that is “made” or “done”. Let’s check the different words with this root word –

All the words formed of the root word ‘fact’ connotes something done or made.

English words containing Dict/Dic in them –

Candidates preparing for various government exams can check the following topics for preparation:

9. Root Word – Cide, a Latin word, Meaning a person or something that kills, Act of killing.

So, it can be understood that the words with root word Cide connote killing of someone or something.

10. Root Word – Anti, a Greek word, Meaning – Opposite or against

The English words formed of the root word ‘Anti’ –

Remember, anything with the root word ‘anti’ is supposed to do against or opposite of something.

Given below are a few links that give questions and answers of important verbal ability topics that are asked in various government examinations, candidates can check these for practice and revision.

For more such questions and answers on different topics or to get more concepts and rules-based explanations of various topics covered in the Verbal Ability section, check the linked page.

There are certain root words that form a standalone word of its own or as part of other common words in the English language. Given below are some common English words that are root words as well:

Given below is the Root words list that originates from either Latin or Greek words and forms the basis of different English words.

Candidates preparing for various government exams can check the relevant links given below:

The table below gives the English root words taken from the Latin language: