Rules of Prepositions in English Grammar with Examples

Understanding the rules of Prepositions is essential for candidates appearing for competitive exams. Almost all the Government exams such as Bank, SSC, RRB, Insurance, etc. have a separate section for the English Language, in both the objective as well as the descriptive paper.

Candidates must be well aware of Preposition rules to use different prepositions correctly in a sentence without making any grammatical errors in the exam. Being abreast with the rules for prepositions can help candidates score good marks in the examination, as well as improve their fluency in English.

Prepositions in the English language indicate the relationship of a noun or pronoun to something. When using a preposition, it is necessary to have the subject and verb before it and should be followed by a noun. Never follow a preposition with a verb.

With this information, let us gain familiarity with the important rules for prepositions discussed in detail in this article.

Candidates preparing for competitive exams can check the given links for preparation:

A preposition is a word or a set of words that indicates the location or some other relation between a noun or a pronoun and other parts of the sentence. The rules of prepositions and their correct usage go as follows:

Preposition Rules – 2- Must be placed before – As the name says ‘Pre-Position’ – it comes before something. Generally, but not always, a preposition goes before a noun or a pronoun. Understand with examples –

4 (B) – When there is a comparison between a subject or verb, instead of like, use as, as if, as though, or ‘the way’. Taking the same sentence as an example –

4(C) – Unless there is a verb involved, do not use ‘as’. ‘As’ means “in the same manner” so avoid using preposition ‘as’ if the verb is not involved. Check the examples –

Candidates can also check other articles on English topics that give clarity on basic concepts, rules, list and example sentences:

Candidates can check the General English for Competitive Exams page for more articles on rules of English grammar, list of idioms and phrases, synonyms & antonyms, etc.

Preposition Rules – 5 – Do not confuse preposition ‘to’ with infinitive ‘to’. ‘To’ is an infinitive participle (to sing, to dance, etc.) as well as a preposition too like (to me, to Moscow, etc.). Understand the difference between the two with the help of examples –

‘To’ as a preposition-

‘To’ as an infinitive participle –

Preposition Rules – 6 – Some words that look like verbs follow the preposition ‘to’. A Verb cannot be an object of a preposition. This rule of preposition may seem confusing, so let us understand with examples –

In these examples, “swim” and “swimming” are not acting as verbs.

In the first example, to swim is part of the infinitive that occurs when a verb is used as a noun, adverb or an adjective. Here, to swim is a thing that the person likes doing, not an action that is being performed.

In the second example, swimming is a gerund which is a noun though it is formed out of a verb. Here, swimming is a thing to which goggles are related. No one in this sentence is performing the act of swimming.

Preposition Rules – 7 – Do not confuse preposition ‘In’ and ‘Into’. This rule of preposition says, use “into” to express motion toward something and reserve the preposition “in” when you want to indicate a location. See the example for clarity –

To ace the verbal ability section of any competitive exam, it is important to have a clear conceptual knowledge of relevant English topics covered in the syllabus. Hence, for candidates assistance, given below is a detailed video explanation on the Preposition rules in English grammar, their usage and application. Candidates can go through the video on Preposition rules to understand the rules given in this article in an effective way – 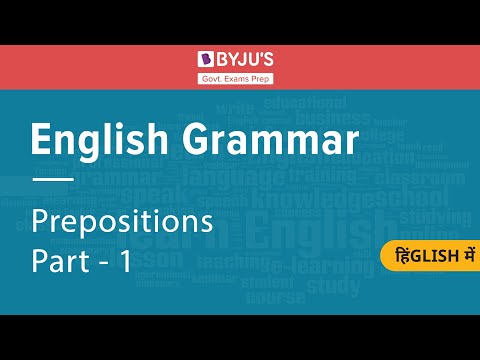 Candidates preparing for any government exam must know that English forms an important part of the syllabus of most of the examinations, hence rigorous practise of various topics is important. Candidates can go through important questions and answers on various English topics given below:

English Question Answers on various topics that are frequently asked in the English section of various competitive exams are given in the Verbal Ability page linked here.

Candidates preparing for the various government exams can refer to the detailed syllabus in the links given below:

Before understanding the important rules of prepositions, it is important to know the types of questions asked in the examination, which makes it necessary to have knowledge of prepositions.

Given below is a sample question asked in the English section of competitive exams for prepositions:

Direction (1-5) Read the paragraph given below and choose the correct option for the blanks from the options given for each question.

Renewable energy resources prevail ——-(1) wide geographical areas, in contrast to other energy sources, which are concentrated in a limited number of countries. Rapid deployment ——–(2) renewable energy and energy efficiency is resulting in significant energy security, climate change mitigation and economic benefits. The results of a recent review of the literature deduced that as greenhouse gas (GHG) emitters begin to be held liable for damages resulting ——– (3) GHG emissions in climate change, a high value for liability mitigation would provide powerful incentives for deployment of renewable energy technologies. In international public opinion surveys, there is strong support for promoting renewable sources such as solar power and wind power. At the national level, at least 30 nations ——–(4) the world already has renewable energy contributing more than 20 per cent of energy supply. National renewable energy markets are projected to continue to grow strongly in the coming decade and ——–(5).

Apart from the samples given above, questions on error spotting and rearranging the sentences also form an important part of prepositions. Candidates can check more Preposition Questions and Answers on the linked page for practise and revision of the topic. 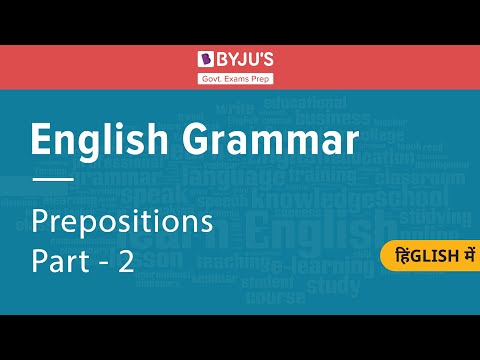 The video on Preposition rules has more parts, candidates can access the other parts by visiting the video link.

Knowing about prepositions rules is imperative for questions like Reading Comprehension, Essay/Letter Writing, Precis Writing, etc. Moreover, to fetch good scores in the reading comprehension or essay letter writing, the basic concepts and differences between common and confusing words should be crystal clear. Hence, you can check a few links given below for assistance:

More such differences based on concepts, topics, subjects, etc are given on the 100 difference Between Article for revision for the candidates.

Aspirants of government exams can check other topics relevant from the exam point of view:

For further questions or information regarding the competitive exams, check the following links: