Geometry begins with a point which denotes a location and is represented by a dot(.). A point has no dimensions i.e. no length, no width and no height, but with the help of this point, we can draw lines and angles. Now, let us give basic knowledge of lines and angles which is introduced in Class 7 syllabus. Lines and angles class 7 provides knowledge about basic geometry. Here, we are going to discuss the various types of angle, its measure, parallel lines angle formed using lines, etc. In this article, we are going to discuss the introduction of lines and angles, and topics covered under this chapter.

The topics and subtopics covered in lines and angles class 7 are:

Let us discuss the concepts covered in the class 7 lines and angles.

To cover Lines and Angles Class 7 syllabus, we have generalized the topics here. Read the below topics one by one to understand the concepts of lines and angles.

A line is a straight figure which doesn’t have an endpoint and extends infinitely in opposite directions.

A ray is a straight line, which starts from a fixed point and moves in one direction.

A portion of the line formed with two definite points is called a Line Segment. A line is a one-dimensional figure and has no thickness.

There are basically 6 types of angles which are: 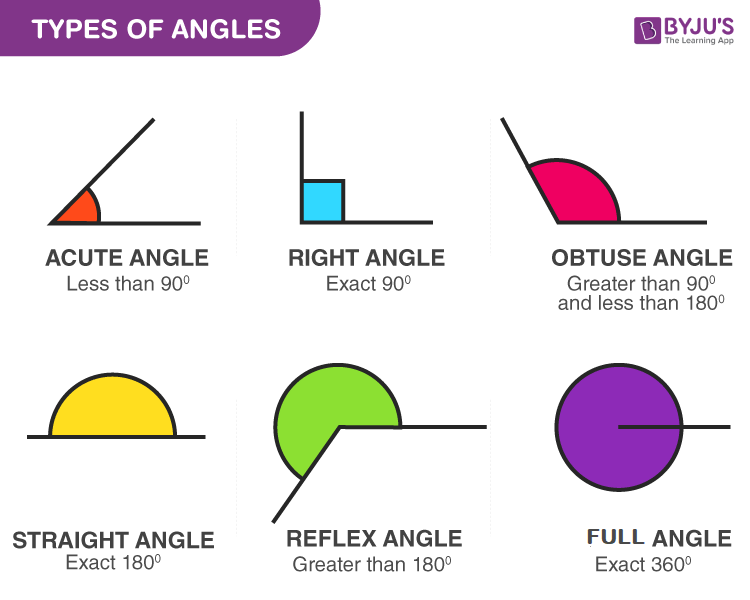 Apart from this, the different angles are:

Complementary Angle: The sum of the measures of two angles is 90°

Supplementary Angle: The sum of the measures of two angles is 180°

Adjacent Angle: Adjacent angles have a common vertex and a common arm but no common interior points

Linear pair: A linear pair is a pair of adjacent angles whose non-common sides are opposite rays

Vertically Opposite Angles: when two lines intersect, the vertically opposite angles so formed are equal.

Intersecting lines: Two lines intersect if they have a point in common. This common point O is their point of intersection.

Transversal: A line that intersects two or more lines at distinct points is called a transversal.

If a transversal cuts two lines, such that, each pair of corresponding angles are equal in measure.

Similarly, if a transversal cuts two lines, then each pair of the alternate interior angles are equal.

In these cases, the lines have to be in the parallel condition.

Class 7 students should exercise problems on Lines and Angles to understand the concepts. Lines and Angles Class 7 ICSE, CBSE and Other State Boards covers almost the same topics as per mentioned above for lines and angles.

For questions based upon Lines and Angles topics, keep visiting BYJU’S. Also, register now to get access to various additional maths video lessons explained in an engaging and effective way.

Quiz on Lines and angles for class 7
Q5