Volvox is a genus of green algae containing around 20 species of freshwater algae. Thousands of cells together form colonies. There are around 500 to 60,000 cells in each colony of volvox. Leeuwenhoek was the first scientist to observe them in 1700. Volvox is widely studied to understand the process of morphogenesis. They live in freshwater habitats such as ponds, ditches, etc. The colour of the pond looks greenish due to the rapid growth of volvox.

Volvox is classified in the class Chlorophyceae due to the presence of chlorophyll. 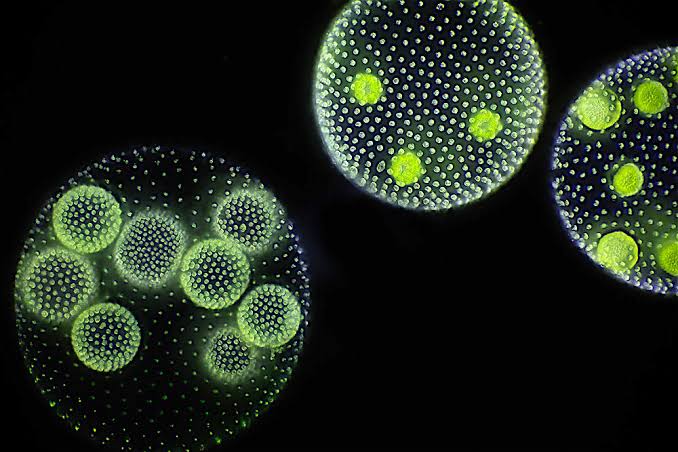 Is Volvox colonial or multicellular?

Volvox is a genus of colonial green algae. Thousands of cells together form colonies. There are around 500 to 60,000 cells in each colony of volvox.

How does Volvox reproduce sexually?

Sexual reproduction is by formation and fusion of male and female reproductive cells known as spermatozoa and ova respectively. Sexual reproduction is oogamous. An ovum is produced inside the oogonium and spermatozoa are produced inside the antheridium. Biflagellate antherozoids get attracted towards oogonium by the chemotactic movement and forms diploid zygote after fertilization. The zygote undergoes meiosis to produce haploid cells.

Is Volvox prokaryotic or eukaryotic?

Volvox is a genus of colonial green algae. They are eukaryotic.

Which class does Volvox belong to?

Volvox is a genus of green algae and they form colonies having thousands of cells. They are eukaryotic. Volvox belongs to the class Chlorophyceae due to the presence of chlorophyll.

What is an example of a Volvox?

Volvox globator is the most common species of Volvox. There are around 20 species come under this genus.

Test your Knowledge on Volvox
Q5