After A Bath - English Poem For Class 1

After A Bath poem is a Class 1 English poem that is crafted in very simple words, which makes it perfect for young minds. It is enjoyable and easily understandable. Written by Aileen Fisher, this poem is one of those which have been included in the CBSE curriculum of English poems for Class 1 kids.

Every language has its own assemblage of poems. English, being one of the most prominently spoken languages of the world, has a plethora of poems in its collection. Poems hold a very important place in the English language. This makes it one of the reasons behind teaching poems to kids at a tender age.

Poems provide kids with a way of expressing themselves, help them understand the emotions and perceptions of the poet and also lets them build their own perspective about different things. You can download for free the After A Bath poem from the link furnished below. 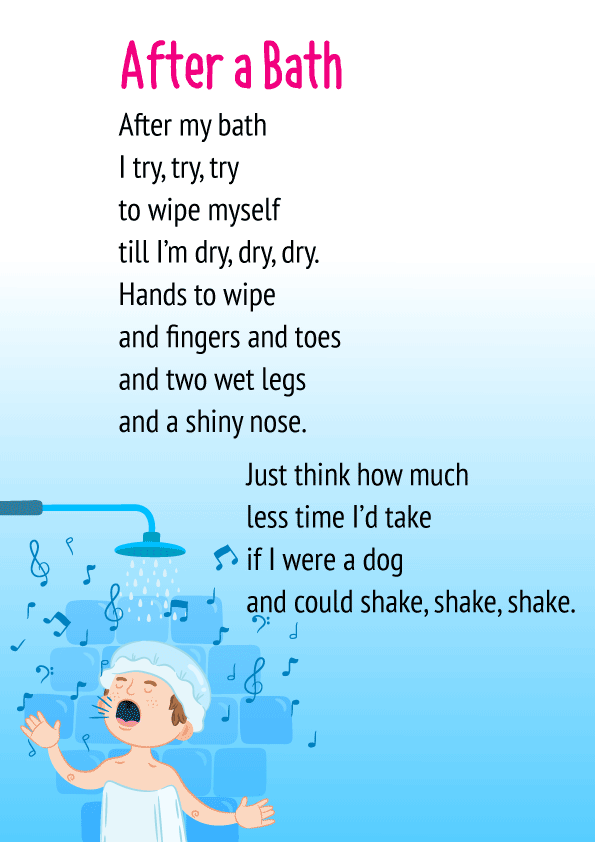 After A Bath Poem Summary

In the After A Bath poem, the character of the poem is a kid, who talks about what he/she does after a bath, how he/she needs to wipe out the water from his/her hands, fingers, toes, legs and nose. The kid then draws a comparison with a dog and says that if he/she were a dog, he/she could have shaken off all the water at once. It would have been easier and less time-consuming.

The short lines of After A Bath poem show the simplicity of a child’s mind – his/her innocence in comparing a human’s and a dog’s routine after taking a bath. Class 1 rhymes are meant to express a child’s emotion to the other one. This After A Bath rhymes does that flawlessly.

Found this poem interesting? To get more interesting English poems and summaries for your little one, you can check our Kids Learning resources where there are numerous poems for your kid which he/she will enjoy learning and reciting.