English poems make for an interesting read. Poems on animals entice the interest of young kids. We generally notice that kids are affectionate towards animals. They like playing with pets at home as well. Animals fascinate kids. That’s probably the reason why kids love the poems where the animals are able to talk.  Here, we bring you one interesting poem on animals for Class 1 kids – One Little Kitten.

Poems in the primary classes usually intend to either impart some morals or introduce nature to kids. There are so many kinds of poems in English for children of Class 1. Animal Poems for Class 1 are crafted for kids in order to make them aware of different animals, their habitats and their characteristics. One Little Kitten poem is one such interesting poem for kids. 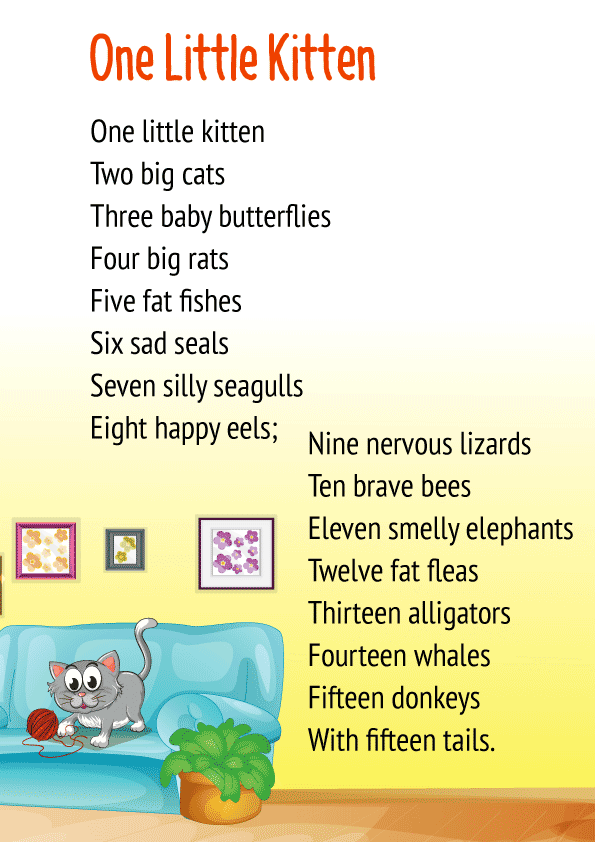 Although the title “One Little Kitten” talks about just one animal, the poem speaks of many animals here! As we proceed, we find that the poem talks not only about a kitten but also about two cats, three butterflies, four rats, five fishes, six seals, seven seagulls, eight eels, nine lizards, ten bees, eleven elephants, twelve fleas, thirteen alligators, fourteen whales and fifteen donkeys. Huh! That was definitely a long list under the title – One Little Kitten.

The language of the English poem for Class 1 is quite simple. It is a poem of 16 short lines only and it talks about 15 kinds of animals. Along with the poem, kids also can revise numbers – one, two, three… up to fifteen. Most of the animal names are preceded by adjectives such as little, big, baby, fat, sad, silly, happy, etc. In a nutshell, the poem lets the kids learn about animals, numbers and even adjectives.

So that was One Little Kitten poem, which is one of the most interesting poems in English as per the CBSE curriculum for Class 1. These poems for 1st grader kids are quite simple and written in a lucid language which make them convenient for young minds to understand it easily.

You can also access other exciting CBSE English Poems of Class 1 here. Meanwhile, you can also check our Kids Learning page where you will find a plethora of amazing resources on various subjects for assisting your kid in studies.