1. Delhi HC sets aside posts given to MLAs in Delhi assembly

1. India has not decided yet on ratifying Paris climate change pact

Topic:  Effect of policies and politics of developed and developing countries on India’s interests

East Asia summit (EAS) – It is a forum held every year by leaders of the East Asian, Southeast Asian and South Asian regions. U.S. and Russia joined the EAS in 2011. Currently, it has 18 members. The first summit was held in 2005 at Kuala Lumpur, Malaysia.

India is a full-time member of EAS.

Topic:  Effect of policies and politics of developed and developing countries on India’s interests

ISRO’s future missions: The ISRO is mulling over missions to Venus or an asteroid, a second mission to Mars. ISRO also has a number of launches in the coming years including the Chandrayaan-2 and a joint mission with NASA. Following the successful launch of GSLV-F05, ISRO plans to launch at least two GSLV Mark II missions every year.

How special can ‘special’ be? That Andhra Pradesh, post-bifurcation, needed a helping hand from the Centre was never in question. But the modalities of the special status the State wanted, needed to be worked out. Could it be declared a Special Category State, or was the right way to grant it a special financial package that did not require meeting the mandated requirements for Special Category status? A.P. does not qualify as a Special Category State; it has neither geographical disadvantages such as hilly terrain nor historical disadvantages such as socio-economic and infrastructural backwardness and unviable finances. 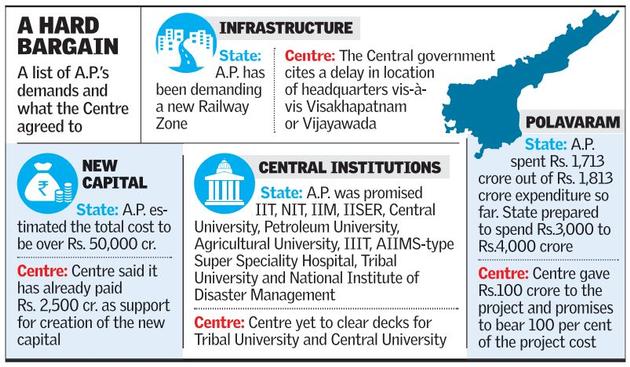 Eventually, when the Centre announced a special package, the emphasis was on assisting the State on the basis of the road map laid down in the Andhra Pradesh Reorganisation Act, an oral commitment made in 2014 by Prime Minister Manmohan Singh, the report of the 14th Finance Commission and the recommendations of the Niti Aayog. The package, valid for five years till 2020, might not have everything that Chief Minister N. Chandrababu Naidu had asked for, but meets most of the reasonable expectations of a State struggling to recover from bifurcation and dealing with the imminent loss of the capital city, Hyderabad. The Polavaram irrigation project was declared a national project; a railway zone was to be formed in the State and the Central Board of Direct Taxes was to issue two notifications on tax concessions. Special Category status could only have been a crutch; the package might be the stimulus that it needs after bifurcation. Under the circumstances, this is a good deal.

However, the political battle over the Special Category status is not going to get over soon. Opposition parties, led by the Congress and the YSR Congress, have targeted Mr. Naidu for failing to convince the Centre. That his Telugu Desam Party is in alliance with the Bharatiya Janata Party will invite charges of a sell-out of A.P.’s interests. Union Minister M. Venkaiah Naidu of the BJP, perhaps anticipating this reaction, indicated that the Centre’s support would be a continuous process. The TDP government must look ahead, and use the special package to boost growth and create conditions for employment generation. While concentrating resources on building the capital at Amaravati, Mr. Naidu must not lose sight of the immediate development goal: the livelihood concerns of ordinary people. That could be his political legacy: a Chief Minister who saw the State through a difficult phase and laid the foundation for a robust economy.

The ratification of the Paris Agreement on climate change by the United States and China, which together account for 38 per cent of global greenhouse gas emissions, provides much-needed momentum for the global compact to be in force beyond 2020. As UN Secretary-General Ban Ki-moon has emphasised, 26 countries have already acceded to the accord; to reach the target of 55 per cent emissions, 29 more must come on board. For the U.S., this is a landmark departure from its long-held position of not accepting a binding treaty like the Kyoto Protocol, where emerging economies heavily reliant on fossil fuels have no firm commitments. The Paris Agreement addressed this issue by stipulating voluntary but verifiable emissions reduction goals for all parties, within the principle of common but differentiated responsibilities that underpin the UN Framework Convention on Climate Change. Contrary to the belief that a requirement to cut GHGs will make economies less competitive, a major section of global industry and business has reaffirmed the potential for trillions of dollars in green investments flowing from the ratification of the Paris Agreement by the U.S. and China. This is a clear pointer for India, which is estimated to have the third highest individual country emissions as of 2014.

There are distinct low-carbon pathways that India has outlined in its national plan submitted to the UNFCCC. Among these, the scaling up of renewable energy and non-fossil fuel sources to 40 per cent of installed power production capacity by 2030 is predicated on technology transfer and the availability of Green Climate Fund resources. Not much progress has been made in this area, and Minister of State for Environment Anil Madhav Dave confirmed recently that no contribution had been received from the Fund. Helping India lock in the right technologies in its growth trajectory is important for a global reduction in greenhouse gases. It is important for the U.S. to help accelerate this process in the area of power generation, following up on the assurances given by Secretary of State John Kerry during his recent visit on clean energy finance, technology, solar catalytic funding and help for power grid upgradation. India can, in parallel, do much more on domestic policy to achieve green and low energy intensive growth such as taxing fossil fuels, managing emissions from waste better and making low-carbon buildings mandatory. India joined other G20 countries at Hangzhou to commit itself to addressing climate change through domestic policy measures. For that to happen, the Centre must initiate a serious discussion with the States on the national imperatives.


a) Liquid nitrogen and liquid oxygen

b) Liquid nitrogen and liquid hydrogen

a) Carbon-dioxide and CFCs

b) Carbon-dioxide and oxides of nitrogen