Rajya Sabha TV programs like ‘The Big Picture’, ‘In Depth’ and ‘India’s World’ are informative programs that are important for UPSC preparation. In this article, you can read about the discussions held in the ‘Big Picture’ episode on “Draft Competition Commission (Amendment) Bill 2020” for the IAS exam.

Candidates can download the PDF as well as watch the episode at the end of the article.

Background of the bill

To know more about Government Ministries and other Departments, visit the linked article.

What is the role of the Competition Commission of India?

What is the need for the Competition Commission (amendment) Bill 2020?

What are the key amendments being proposed?

To know about other laws featured in the Indian Penal Code, visit the linked article.

What are some of the key issues that need to be addressed?

Who will be benefiting from the recommendations when they are implemented?

What were the deliberations that took place? 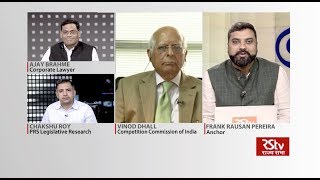 Choose the correct answer from the below given options.

A) Only statements 1 and 2 are true

What are the objectives of the Competition Act 2002?

1) Prevent practices having adverse effect on competition, -to promote and sustain competition in markets, 2) to protect the interests of consumers, 3) to ensure freedom of trade carried on by other participants in markets in India and for matters connected therewith or incidental thereto.

What is the preamble to the Competition Act?

An Act to provide, keeping in view of the economic development of the country, for the establishment of a Commission to prevent practices having adverse effect on competition, to promote and sustain competition in markets, to protect the interests of consumers and to ensure freedom of trade carried on by other participants in markets, in India.

Why was the MRTP Act replaced?

The Monopoly and Restrictive Trade Practice Act 1969 became obsolete in the present world of throat cutting competition. The MRTP Act prevented the expansion of the companies whose assets were 100 crore, because these companies need to take government permission to expand their business.

Which is not considered an anti competitive agreement in the Competition Act 2002?