The hoolock gibbons are three species of the gibbon family found in eastern Bangladesh, Northeast India, Myanmar and Southwest China.

The species are as follows:

This article will further give details about the Hoolock Gibbons within the context of the Civil Services Examination.

Characteristics of the Hoolock Gibbons

Hoolock are one of the largest species of the Hoolock genus, coming at second after the siamang. They are 90 cm in size and weigh about 6 to 9 kg. Both the males and females are of the same size, but differ in terms of colouring: the males are black in colour with white brows while the females are grey-brown. The rings around their eyes and mouths give them a mask-like appearance. 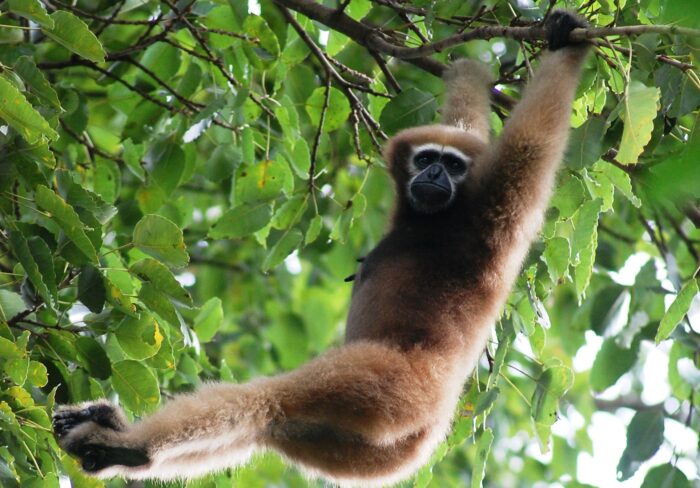 The gibbons are active during the day and arboreal in nature (it refers to the locomotion of animals on trees). The Hoolock Gibbons form monogamous relationships that also mark territories. Their calls help in locating family members and repelling challengers to their territory. The diet of the gibbons consist of fruits, insects and leaves.

The hoolock gibbons are found in the south of Brahmaputra and north and east of the Dibang Rivers. Its range in India extends into the all the northeastern states of Assam,Manipur, Mizoram, Nagaland, Meghalaya, Arunachal Pradesh and Tripura.

The classification of the hoolock gibbons have changed constantly over the last few years. They were first classified under the genus Hylobates, except for the siamang.

A new subspecies of the western hoolock gibbon is the Mishmi Hills hoolock gibbon (Hoolock hoolock mishmiensis). It was recently discovered in north east India

Which is the well known sanctuary of the Hoolock Gibbons?

Hoollongapar Gibbon Sanctuary, (earlier known as the Gibbon Wildlife Sanctuary or Hollongapar Reserve Forest), is a protected region, famous for being home to the country’s only ape species and only nocturnal primate of Northeastern India called the Bengal slow loris (Nycticebus bengalensis).

What is the average lifespan of Hoolock Gibbon?

The average lifespan of a Hoolock Gibbons is 35 years, while they can live up to 60 years in captivity.