The taxation system is an important concept in the economy of a country. In order to run the government and manage the affairs of a state, money is required. So the government imposes taxes in many forms on the incomes of individuals and companies.

There are 2 types of taxes levied:

This is an important topic for IAS Exam. In this article, relevant details related to taxation in India have been provided.

Types of the taxation system in India

The types of taxation system can be stated below:

Value-added tax or VAT is an indirect tax, which is imposed on goods and services at each stage of production, starting from raw materials to the final product. It is levied on the value additions at different stages of production.

Value Added Tax was introduced into the taxation system in India on 1st April 2005 replacing the Sales Tax. As of June 2014, all states and UTs in India except the Andaman and Nicobar Islands and Lakshadweep were implementing VAT.

VAT is widely applied in European countries. However, now a number of countries across the globe have adopted this tax system. GST (Goods and Service Tax) which is to be implemented in India is nothing but a kind of VAT system.

The Goods and Services Tax (GST) is a value-added tax to be implemented in India, the decision on which is pending. It will replace all indirect taxes levied on goods and services by the Indian Central and State governments.

GST is aimed at being comprehensive for most goods and services with few tax exemptions.

India is a federal republic, and the GST will thus be implemented concurrently by the central and state governments as the Central GST and the State GST respectively.

The implementation of GST will lead to the abolition of other taxes such as octroi, Central Sales Tax, State-level sales tax, entry tax, stamp duty, telecom license fees, turnover tax, tax on consumption or sale of electricity, taxes on transportation of goods and services, etc, thus avoiding multiple layers of taxation that currently exist in India.

Advantages of Implication of GST in India

Limitations in implementing GST in India

The limitations in GST implementation in India are stated below:

To know about the direct tax code, refer to the linked article.

Invented by Arthur Laffer, this curve shows the relationship between tax rates and tax revenue collected by governments.

The curve suggests that, as taxes increase from low levels, tax revenue collected by the government also increases. It also shows that tax rates increasing after a certain point (T*) would cause people not to work as hard or not at all, thereby reducing tax revenue.

Eventually, if tax rates reached 100% (the far right of the curve), then all people would choose not to work because everything they earned would go to the government. 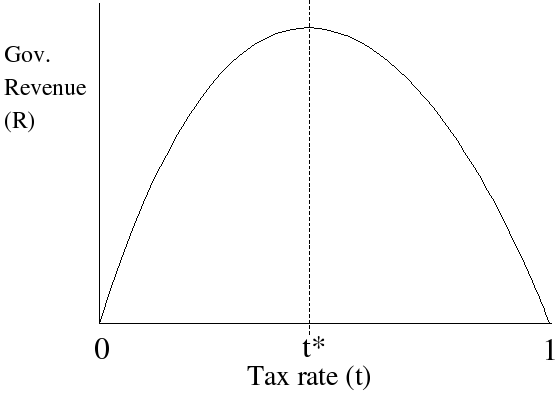