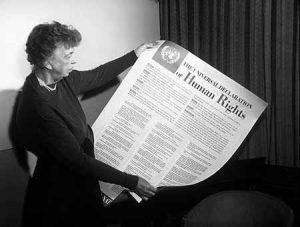 Eleanor Roosevelt with the Declaration

On 10 December 1948, the United Nations adopted the Universal Declaration of Human Rights in Paris, France. This day is celebrated throughout the world as Human Rights Day. Read more about this incident for the IAS exam

Aspirants would find this article very helpful while preparing for the UPSC 2021.