1. SC to hear petition against contempt law on August 10

Supreme Court is scheduled to hear a writ petition jointly filed by veteran journalists, along with advocate Prashant Bhushan, against the law of holding a person in contempt for ‘scandalising the court’.

Read more about the subject of Contempt of Court covered in 2nd August 2020 Comprehensive News Analysis.

1. Pompeo against vote for Cuba on Human Rights Council

U.S. Secretary of State has urged UN members not to support Cuba’s bid to join the organisation’s Human Rights Council.

The U.S. withdrew from the council in 2018, with Ambassador Nikki Haley calling it a cesspool of political bias and a hypocritical and self-serving organisation that makes a mockery of human rights.

Union Environment Minister has said that one of the key motives of the proposed Environment Impact Assessment Notification, 2020 (EIA 2020) was to bring environmental violators under a regulatory regime by imposing a heavy penalty on them.

The third review of the monetary policy by the Reserve Bank of India since the COVID-19 pandemic spread in the country. 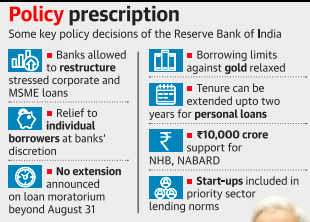 To curb misuse, norms for opening current accounts have been tightened.

For instance, if a borrower enjoys credit facilities of ₹100 crore across several banks: of this, if Bank A has given a facility of ₹8 crore (under 10 percent of the total exposure) and Bank B has provided ₹92 crore, then debits from Bank A can only be for transfer of funds to Bank B (and not for other vendor payments).

1. Academic research is necessary, but not sufficient

Re-defining the architecture of R&D systems:

Complementarity of AR and PAR:

Road ahead for academia:

For more related information, refer to:

RBI has said that the monetary transmission has improved considerably.

RBI’s debt resolution plan for corporate and personal loans has been welcomed by analysts, bankers and corporates.

The Reserve Bank of India (RBI) has unveiled a scheme of offline retail payments using cards and mobile devices.

On the first anniversary of the revocation of Article 370, which led to the creation of the Union Territories of Jammu & Kashmir and Ladakh and ended the special status for the region, China has prompted the United Nations Security Council (UNSC) to discuss the Kashmir issue in a closed-door meeting.

U.S. intelligence agencies are inspecting the efforts by Saudi Arabia to build up its ability to produce nuclear fuel that could put it on a path to developing nuclear weapons.