The Supreme Court was hearing an application about the lack of transparency in the appointment of information commissioners. 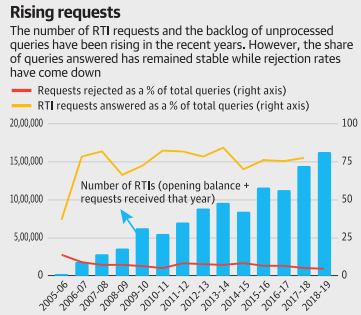 Besides highlighting that the court was not against the exercise of the right to information, the Chief Justice has said that guidelines need to be laid down to check the locus of the RTI applicant and put a filter on the kind of requests made under the 2005 Act.

The Issue has been covered comprehensively in 12th October Comprehensive News Analysis in the editorials segment. Click Here to read.

The Supreme Court has directed to form a High Level Committee (HLC) and look into the feasibility of technologies to control and monitor pollution.

The Central government has released GST compensation of Rs.35,298 crore to States and Union Territories.

The Issue has been covered comprehensively in 13th December Comprehensive News Analysis in the editorials segment. Click Here to read.

The 2019 United Nations Climate Change Conference concluded without any major progress or announcement regarding the global effort against climate change.

Concerns with the carbon market mechanism:

The rulebook for the Paris deal:

The Personal Data Protection Bill, 2019 was introduced in Lok Sabha by the Minister of Electronics and Information Technology in December 2019.

Views expressed by the Chairman of the Economic Advisory Council to Prime Minister regarding the economy.

Reasons for the slowdown:

The Act gives eligibility for Indian citizenship to illegal migrants who are Hindus, Sikhs, Buddhists, Jains, Parsis and Christians from Afghanistan, Bangladesh and Pakistan. The Act does not apply to the tribal areas of Assam, Meghalaya, Tripura, Arunachal Pradesh, Mizoram and Nagaland.

Light Detection and Ranging is a remote sensing method that uses light in the form of a pulsed laser to measure variable distances to the Earth. LiDAR can be used for monitoring pollution. Topographic LiDAR typically uses a near-infrared laser to map the land, while bathymetric LiDAR uses water-penetrating green light to also measure seafloor and riverbed elevation.

Export Credit Guarantee Corporation of India (ECGC) introduced ‘NIRVIK’ scheme to ease the lending process and enhance loan availability for exporters. Under the new ‘NIRVIK’ scheme, which is also called the Export Credit Insurance Scheme (ECIS), the insurance cover guaranteed will cover up to 90 percent of the principal and interest. The insurance cover will include both pre and post-shipment credit.

Exercise SURYA KIRAN is a bilateral annual military exercise. The joint military training exercise is held between India and Nepal.