1. The Palk Bay fisheries Conflict: A tale of competing livelihoods and a depleted catch

Syllabus: India and its Neighbourhood – Relations

Context: The fishermen of India and Sri Lanka are in conflict on how to share the fish resource in the narrow Palk Strait which separates the two countries.

What are the Issues?

Nut Graf
The Tamil Nadu fishermen and their counterparts from northern Sri Lanka have been at loggerheads over the inability to come to a decision on how to best share the resources of the sea. Unless this issue is resolved amicably to the best interests of all the stakeholders concerned by the highest authorities of both India and Sri Lanka, this will continue to be a thorn in the India – Sri Lanka bilateral relations and adversely affect the lives and livelihoods of scores of fishermen from both sides.

Context: The National Health Authority (NHA) said that it has undertaken an exercise to integrate beneficiary databases under different schemes to upgrade its own database.

Nut Graf
The majority of beneficiaries from SECC, 2011 are also eligible for benefits under the National Food Security Act (NFSA). The integration of databases will enable beneficiaries to seek information regarding their entitlement under different schemes.

2. There is Constitutional impropriety, Says NC

Syllabus: Parliament and State legislatures—structure, functioning, conduct of business, powers & privileges and issues arising out of these.

Context: The National Conference (NC) has mainly highlighted issues with the second draft of the J&K Delimitation Commission.

Description: It is argued that “constitutional impropriety, lack of implementation of laid-down guidelines and irrational distribution of geography and population” are the issues in the proposals in the second draft of the J&K Delimitation Commission.

It is necessary that the Delimitation Exercise is carried out in a manner that results in equal distribution of seats to the constituencies for the better representation of the people. The Delimitation Commission ought to uphold the practice of free and fair elections.

Mains: Functioning of LIC and Consequences of LIC IPO on Economy

What does the LIC do?

Why are policyholders worried about the IPO?

India’s biggest-ever share sale raises a troubling question: Will a cash-strapped state get greedy and end up shaking the money tree so hard that it stops bearing fruit for future policyholders. In a country like India which has no proper safety net for citizens, some have seen LIC as offering low but safe returns to millions of citizens.

1. Zooming in on the potential of India’s geospatial sector

Mains: Impacts of deregulation of the geospatial sector for Indians and the challenges faced by the sector.

Major events after the declaration of deregulation:

Some of the major issues in the geospatial sector are as follows:

No ready to use solution:

Measures to be taken:

It is a well-known fact that these issues cannot be resolved overnight and formulation of guidelines alone will not solve the problems. But, India needs to take certain measures to address these issues aggressively:

Awareness among the users:

No competition among entrepreneurs and National Organizations:

Despite India having a robust ecosystem for geospatial technology, the full benefits of this are yet to fully percolate into the general populace. Unless the right policy framework and regulatory support are provided to remove the existing constraints, the Indian entrepreneurs in this domain will be at a disadvantage in the future when the geospatial technology would pervade various other fields along with other emerging technologies.

Syllabus: Role of civil services in a democracy

Prelims: Article 312 of the Indian Constitution

The Centre has proposed amendments to 6(1) of the Indian Administrative Service (IAS) (Cadre) Rules of 1954 in order to exercise greater control in the central deputation of IAS officials.

What are the IAS (Cadre) Rules?

The causes of shortage are discussed below:

The problem of shortage of IAS officers in central deputation can be resolved by keeping cooperative federalism and the interests of national unity and administrative efficiency above anything else. In this light, the Centre should reconsider the amendments to the IAS Cadre Rules. 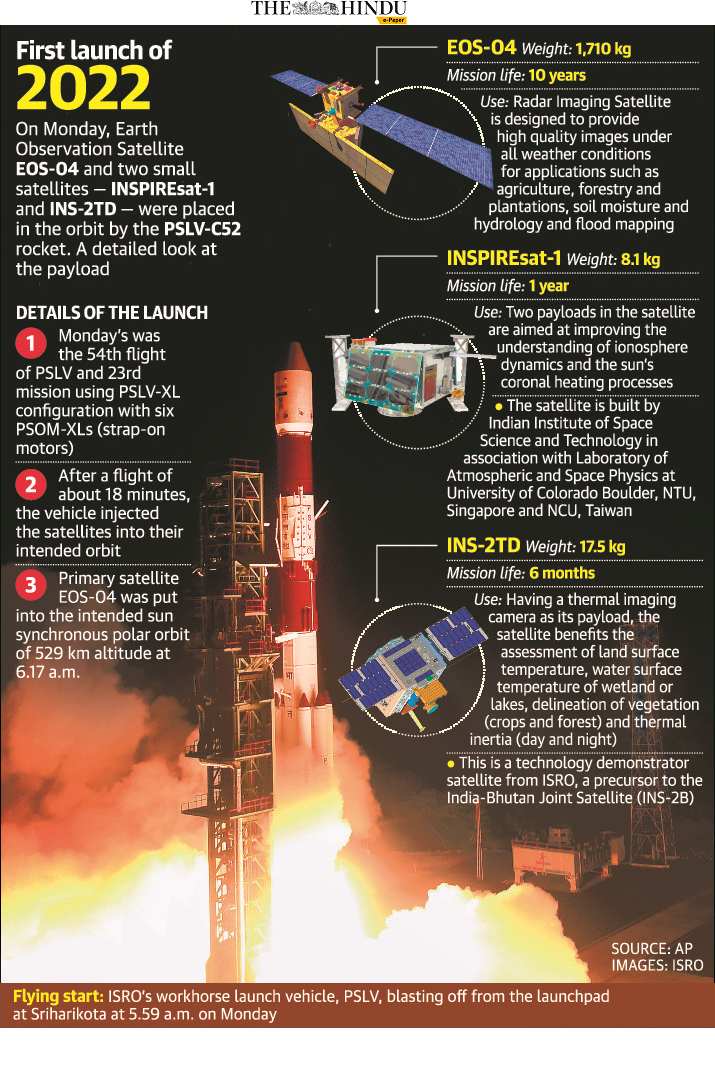 1. Inflation edges past 6% in January

Which of the statements given above are correct? PYQ (2021)