The Union Government has told the Supreme Court that the West Bengal State Government does not have any absolute power to keep the Central Bureau of Investigation (CBI) from investigating crimes inside the State.

Does withdrawal of General Consent mean that the CBI can no longer probe any case in the state?

1. 43 countries call on China at UN to respect Uighur rights

Forty-three countries have called on China to “ensure full respect for the rule of law” for the Muslim Uighur community in Xinjiang.

The 26th meeting of the United Nations Conference of Parties (CoP) will begin in Glasgow on November 1, 2021. 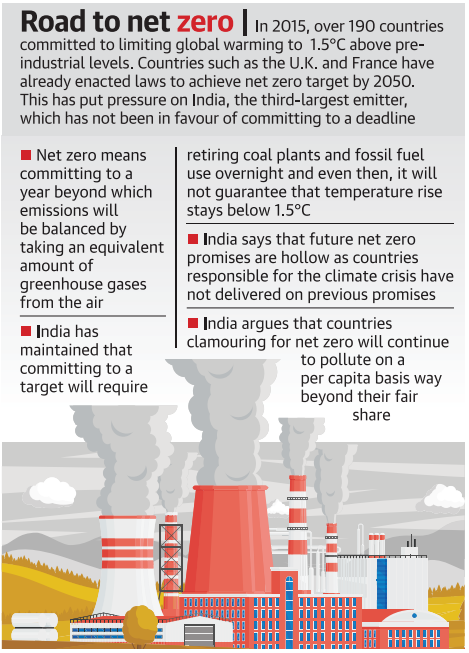 1. Development that is mindful of nature

The article talks about the need for sustainable development with minimal effect on the environment in Kerala that has been a victim of environmental disaster yet again.

In the backdrop of these environmental disasters and consequent loss of life, there is a dire need for a serious review of the land-use pattern in Kerala.

The most recent landslide in Kerala should lead the government to immediately review two major projects with the potential to lower ecological security.

Rushing through developmental projects in the face of intimations from nature through disasters such as landslides would be a case of utter ignorance. Projects such as the new railway lines and highway widening should be undertaken only after public hearings open to citizens.

A clean energy transition plan is proposed that is expected to ensure energy security and also contribute towards climate change.

Caol as the major contributor to electricity:

VREs and costs to the consumer:

Given below are the key points with regards to VREs and the costs to the consumers:

Structure of a plan:

A time-bound plan for India’s power sector has been developed which includes:

Benefits of the plan:

The estimated benefits of the plan are as follows:

India is working continuously to become energy efficient and it should implement the transition plan as soon as possible to meet its energy requirements and mitigate climate change.

India’s military posture in the Tawang sector of Arunachal Pradesh has added an offensive punch through new deployments.

The arrival of the migratory Amur Falcons to Tamenglong district of Manipur for the annual stopover. The month-long winter session of Parliament is likely to commence from the fourth week of November 2021 following all COVID-19 protocols.

Sessions of the Parliament:

A session of the Indian Parliament is the period during which a House meets almost every day uninterruptedly to manage the business. There are typically three sessions in a year.

1. Air bubbles to continue for some time

According to Minister for Civil Aviation, international air travel to and from India will continue only under the “air bubble” arrangement for the foreseeable future.

What are Air Bubble Agreements?

Which of these statements are correct?

Which of these statements is/are incorrect?