CDS Eligibility 2022 – The eligibility criteria for CDS is prescribed by the Union Public Service Commission. Aspirants are required to meet the CDS eligibility before applying for the Combined Defence Services exam.

Aspirants of other Government exams can check the linked page for the latest information regarding upcoming exams.

The UPSC mentions the CDS eligibility in detail in the official notification of the exam. Candidates can check the CDS Notification to dive deep for relevant details.

Aspirants must note the following points in relation to CDS eligibility -.

Go through the detailed eligibility conditions mentioned below –

Note – Candidates below 25 years of age must be unmarried. Marriage is not permitted during training. Married candidates above 25 years of age are eligible to apply, but during the training period they will neither be provided married accommodation nor can they live with family out of the premises.

Note – Male divorcee/widower candidates cannot be treated as unmarried males for the purpose of their admission in IMA/INA/AFA/OTA, Chennai courses, and accordingly they are not eligible for these courses.

To put it simply, only unmarried candidates are eligible to apply for the CDS exam. The highlights of CDS eligibility in terms of age limit are given below –

Candidates willing to appear for the Combined Defence Services examination must go through the detailed CDS syllabus and exam pattern to kickstart their preparation.

The Union Public Service Commission has set a minimum level of education qualification that a candidate must possess to be eligible for NDA examination.

Aspirants of CDS exam can check the related links given below-

To be eligible for the CDS exam, candidates have to meet the criteria for nationality and citizenship.

Aspirants willing to apply for the CDS exam must be –

Provided that a candidate belonging to categories (2), (3), (4) and (5) presents a certificate of eligibility issued by the Government of India to the recruiting body.

However, the Certificate of eligibility will not be necessary in the case of candidates who are Gorkha subjects of Nepal.

Candidates must be physically and mentally fit as per the guidelines of UPSC. A good number of qualified candidates get disqualified on medical grounds. Therefore, candidates are strongly advised to get themselves medically tested before applying for CDS Exam.

Common defects found in candidates are –

Note – Permanent body tattoos on any other part of the body are not acceptable, and candidates will be barred from further selection. Tribes with tattoo marks on the face or body as per their existing custom and traditions will be permitted on a case to case basis. 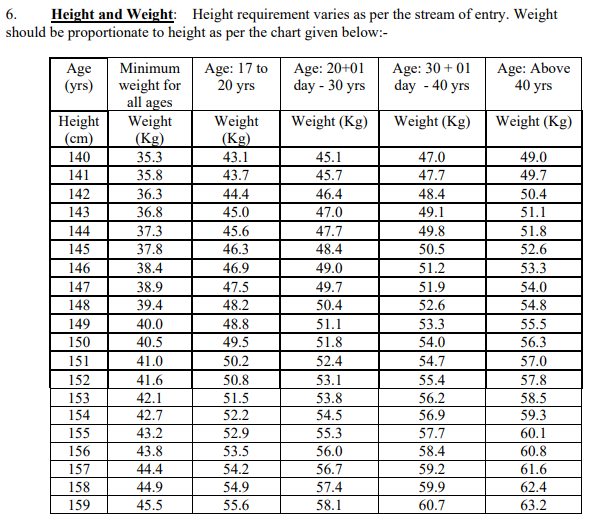 The candidates applying for the examination should ensure that they fulfil all the eligibility conditions for admission to the examination. The CDS eligibility in terms of physical and medical standards covering height and weight for different age groups, vision standards for Naval officers, waist-hip ratio, body mass index, etc. Hence, candidates are advised to go through the official notification for further clarification on Combined Defence Service Eligibility Criteria.

Aspirants appearing for CDS exams must go through the Competitive Exam Preparation Strategies to plan out a good study schedule and leave no stone unturned for exam preparation.