The CAPF eligibility rules and conditions are set by the Union Public Service Commission.

The full form of CAPF is Central Armed Police Force. The CAPF examination is conducted to recruit Assistant Commandant (Group A) Officers in seven Police Organization of India. Candidates can check the detailed information on CAPF Exams over here.

The Union Public Service Commission has not yet started the recruitment process for CAPF AC 2022 examination. However, the notification for CAPF AC 2022 is scheduled to be released on April 20th 2022.

The last recruitment exam conducted by the commission was CAPF AC 2020 which was held on 20th December 2020.

Given below are the UPSC CAPF exam dates 2022:

This article will upkeep you with the important UPSC CAPF eligibility criteria, scroll down.

The admission of candidates at all the stages is purely provisional subject to satisfying UPSC eligibility for CAPF exam.

Eligibility conditions are verified with reference to original documents only after the candidate has qualified the Interview round.

The UPSC CAPF eligibility criteria include the following:

To be eligible for CAPF exam 2022 a candidate must be a citizen of Indian National. Those who belong to the nationality of Bhutan and Nepal are also deemed eligible for Union Public Service Commission Central Armed Police Force exam.

Applicants who hold the nationality of any other country does not satisfy the Central Armed Police Force eligibility condition. Such candidates can take the CAPF exam only if they have been given the consent of the Central Government that must be expressed in writing to be considered.

CAPF exam eligibility does not put any condition on sex i.e. both male and female are eligible to take UPSC CAPF Assistant Commandant Exam provide they fulfil the conditions given in medical standards.

The official Notification of UPSC CAPF AC exam states that no applicant must be younger than 20 years and older than 25 years of age.

Simply, candidates who are born not earlier than 2 August 1995 and not later than 1 August 2000 (as per the CAPF 2020 notification) satisfies UPSC CAPF eligibility condition.

Candidates belonging to certain reserved category enjoys certain relaxation on the above mentioned CAPF age limit. Let’s take a look at it:

Note- Candidates belonging to SC/ST and OBC categories who are also covered under any clause such as Civilian Central Government Servants/Ex-Servicemen and persons domiciled in the State of J&K, will be eligible for the total age-relaxation in both the categories.

Merely fulfilling the nationality and age limit would not suffice the candidature for CAPF exam. Candidates also have to meet the minimum educational qualification to qualify the UPSC CAPF eligibility.

Candidate must hold a bachelor’s degree in any discipline to qualify the minimum qualification criteria in CAPF exam eligibility.

Broadly the Assistant Commandant eligibility under academics qualification goes as under:

Candidates also have to pass the physical and medical standard test besides the above- mentioned criteria to qualify CAPF eligibility. 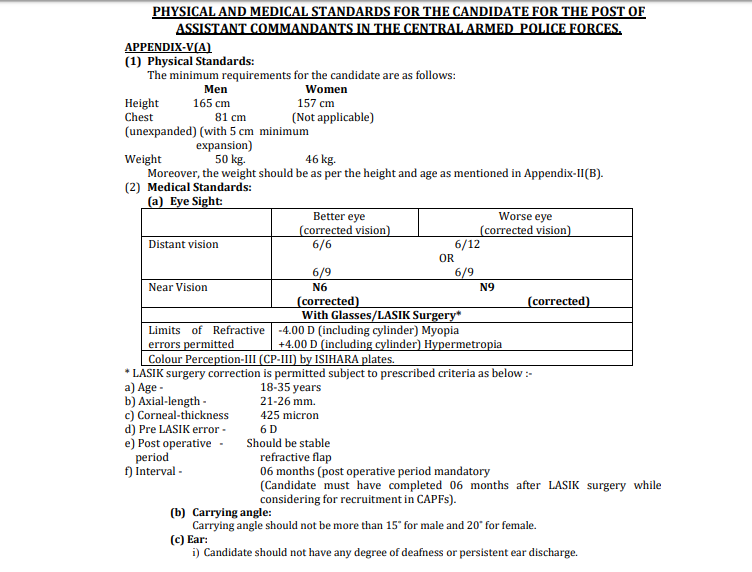 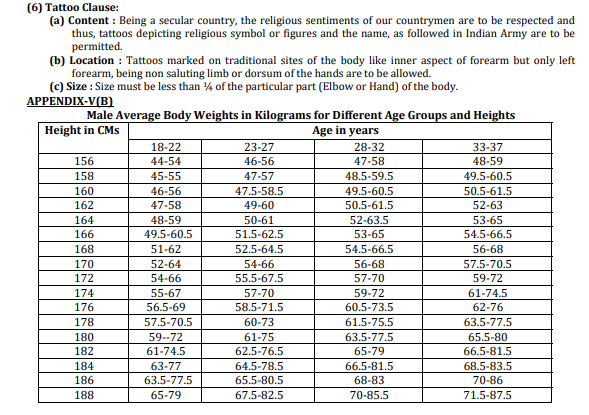 There are certain conditions as to which a candidate is not allowed to take UPSC CAPF Assistant Commandant exam 2022.

In case of any failure or if the employer of the candidate withhold the permission to appear for the exam then, the decision of UPSC regarding application acceptance and candidates CAPF eligibility will be final.

Candidates can check in-depth information on CAPF recruitment over here.

Candidates have to satisfy the following to qualify the UPSC CAPF eligibility criteria:

Candidates can also check the difference between Indian Army & CAPF in the given link.

Aspirants of other government exams can go through eligibility conditions and other detailed information.

Q.1. What is the restriction for government employees on CAPF eligibility?

Ans. Any government employee whether working permanent or temporary or any person working in any Public enterprise have to submit an undertaking in order to be eligible for the CAPF exam.

Q.2. What is the age limit criteria for CAPF examination?

Ans. Candidates willing to appear for the UPSC CAPF 2022 exam must not be less than 20 years of age neither more than 25 years.

Ans. As per the official notification of CAPF exam, any candidate willing to fill the CAPF Application Form must possess a graduation degree from a recognised university.

Q.5. What is the age relaxation given to Jammu & Kashmir domiciled candidates?

Ans. Candidates who are domicile of Jammu and Kashmir have 5 years of age relaxation for to apply for CAPF exam.

Q.6. What is the number of attempts allowed for UPSC CAPF?

Ans. There is no such specific number of attempts for CAPF exam is mentioned in the notification, just the age limit i.e. till 25 years candidates can appear for the CAPF exam as many times as they wish to. However, the maximum age limit is relaxed for reserved category candidates.

Q.7. Is there any eligibility conditions for CAPF exam based on candidates’ gender?

Ans. CAPF exam eligibility does not put any condition on sex i.e. both male and female are eligible to take UPSC CAPF Assistant Commandant Exam provide they fulfil the conditions given in medical standards.