CAPF full form is Central Armed Police Force. It works under the authority of the Ministry of Home Affairs, Government of India.

Every year, UPSC CAPF exam is held to recruit various Group A and Group B officers in the Indian security forces mentioned above.

Recruitment in CAPF is done in three levels:

CAPF Assistant Commandant Exam is a national level examination conducted by UPSC on an annual basis.

The Central Armed Police Force follows a standard procedure for CAPF recruitment of Assistant Commandant officers in the varied police force of India.

As per the UPSC CAPF notification, the Assistant Commandant recruitment exam is scheduled to be held on 9 August 2020.

Given below is the tentative UPSC CAPF exam schedule 2020:

Division of 323 CAPF recruitment vacancies in the CAPF notification 2019 in the different police force is given below:

The total number of vacancies for 2020 exams will be updated by the Commission shortly.

Each year the number of CAPF vacancies varies as per the requirement in the Central Armed Police Force.

Year-wise distribution of CAPF vacancies in the Indian security forces is given below:

The UPSC CAPF notification states that the exam for Assistant commandant recruitment will be conducted in the following centers.

For the CAPF 2019 Exam, the application to CAPF job notification was closed on 20 May 2019 i.e. the candidates had to apply for CAPF Assistant Commandant notification during the period from 24 April 2019 to 20 May 2019.

Candidates who applied to the Assistant Commandant CAPF job profile had followed the procedure prescribed in the CAPF notification 2020.

The online application process for CAPF recruitment is as follows: 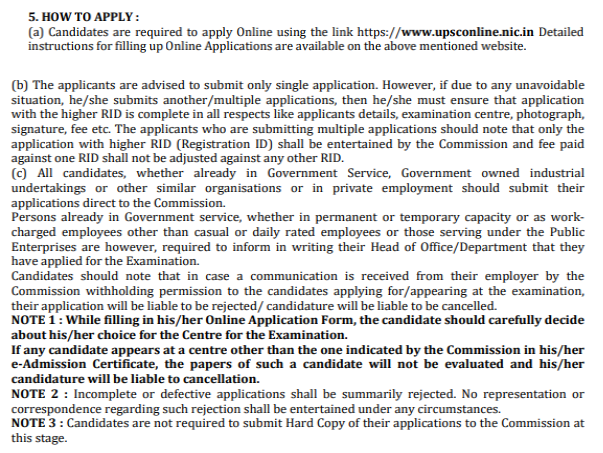 Candidates who applied to the UPSC Assistant commandant Notification are given the facility to withdraw their application as well.

Candidates can check the details of CAPF Admit card for Assistant Commandant exam 2020 over here.

Candidates who wish to apply for UPSC CAPF recruitment exam can pay by both online and offline mode.

It is important for candidates to know that Assistant Commandant Fee once paid is not refundable in any case. Also, it can not be reserved for further examinations.

Scheduled Caste/Scheduled Tribe and Women of all category are exempted from paying any fee for CAPF recruitment.

Candidates who belong to General and other backward classes category have to pay rupees 200 for registering themselves for UPSC CAPF recruitment.

Though the overall CAPF salary after the 7th Pay Commission has increased but the Assistant commandant salary depends upon the grade and scale of the employee.

The updated details of CAPF salary for Assistant Commandant post is given below:

Candidates who wish to be the Assistant Commandant officer must fulfill the CAPF exam eligibility criteria.

CAPF eligibility mandates candidate to be a citizen of Indian National. Candidates belonging to the nationality of Bhutan and Nepal are also deemed eligible for UPSC CAPF exam.

Applicants who hold the nationality of any other country does not satisfy the Central Armed Police Force eligibility condition. Such candidates can take the CAPF exam only if they have been given the consent of the Central Government that must be expressed in writing to be considered.

Both male and female are eligible to take UPSC CAPF Assistant Commandant Exam, just that the medical standard mentioned for specific gender has to be fulfilled.

Check the linked article for further details on CAPF eligibility.

The written examination of CAPF Assistant Commandant to be conducted by UPSC will comprise two Papers in both English and Hindi language.

Paper-I in CAPF exam will have Multiple Choice Questions carrying 250 marks and Paper-II will be subjective type holding weightage of 200 marks.

Time given to write CAPF paper-I is 2 hours and for Paper-II, it is 3 hours.

Post the qualification of paper-I and paper-II candidates will be called for Physical efficiency test.

Candidates declared qualified in PET test will be called for final Interview round carrying 150 Marks.

CAPF Syllabus 2019 for Paper-I tests the General Ability and Intelligence of the candidate and Paper-II tests the language proficiency through descriptive writing of Essay, Comprehension etc.

To check the detailed syllabus of CAPF exam click on the given link.

CAPF syllabus highlights are given below:

Candidates eyeing for the Assistant Commandant recruitment are suggested to check the detailed CAPF preparation tips and important Booklist for UPSC CAPF exam.

Q.1. What qualification is required from candidates to appear for CAPF recruitment?

Ans. Candidates willing to appear for UPSC CAPF Recruitment must possess a Bachelor’s Degree in any discipline from a recognised university. The detailed related to educational requirements for CAPF Exam is given in CAPF Eligibility page.

Q.2. What are the best books for CAPF preparation?

Q.3. Does UPSC conduct interview round for selection in CAPF Exam?

Ans. Yes, the Union Public Service Commission holds an interview round of candidates for the final selection in the CAPF examination.

Q.4. How many marks do candidates lose for wrong attempts in CAPF examination?

Ans. In CAPF Exam candidates lose 1/3 marks for each wrong answer marked in Paper I. Paper II of CAPF exam has no negative marking scheme. However, to avoid this negative marking it is advised that candidates should take Free Online Mock Tests provided in the link.

Q.5. Will the candidates receive the CAPF Admit Card through Mail or Post?

Ans. No, Candidates are not sent any emails or posts for the CAPF Admit cards or for any sort of communication. All the communication related to CAPF exam is done through the official circulars published on the website. Hence, through official websites only, candidates have to download the CAPF Admit Card.

Q.6. How can candidates retrieve the registration Id and Password in case they forget?

Ans. In case candidates forget their password and registration ID, they can retrieve it by clicking on Forgot RID option and resetting the password by filling in the information asked.

Q.7. Is the medical/physical efficiency test conducted in CAPF exam?

Ans. Yes, the candidates who clear the paper I and Paper II of CAPF examination have to undergo the Physical efficiency test/ Medical Exam. The PET/Medical test is just qualifying in nature, no marks are awarded for it, but, candidates do have to fulfil the medical standards prescribed in the notification.