Looking for NCERT Solutions for Class 12 Biology Chapter 7 – Evolution? Look no further. We at BYJU’S bring to you solutions for all the NCERT textbook questions. Not only this, we also provide solutions to all the chapters for all classes. What makes NCERT Solutions reliable is the fact that solutions are framed by subject-matter experts having extensive knowledge in the respective fields, teaching the right answering techniques expected to be used in the board examinations.

The solutions provided in the NCERT Solutions for Class 12 are helpful in enhancing the conceptual knowledge of students. It enhances the learning and understanding capabilities of students, thereby enabling them to perform exceedingly well in competitive examinations. Regularly referring to and practising NCERT Solutions can be extremely beneficial for students. 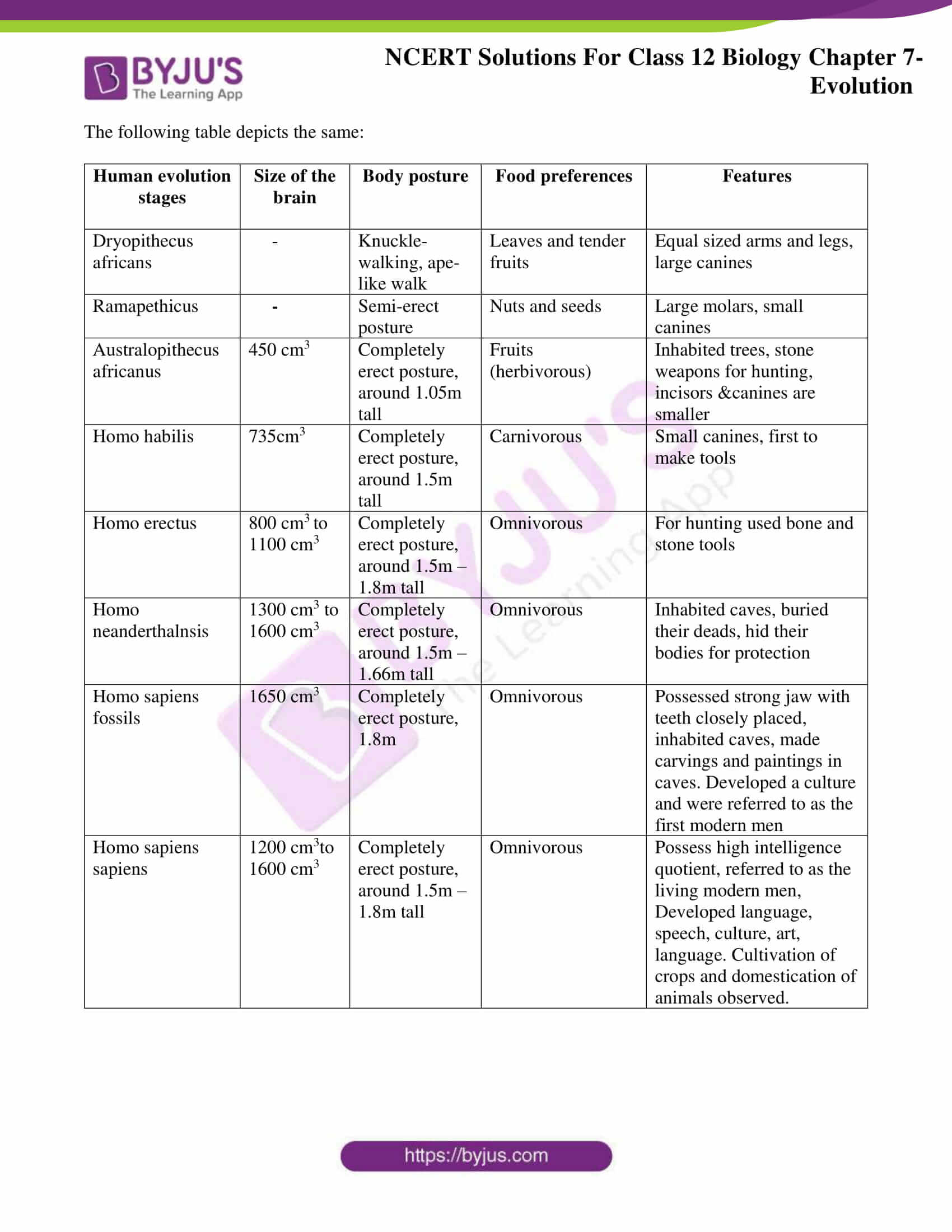 As per Darwin’s observation, the environment selects entities with favourable variations, and these entities are capable of surviving. When a population of bacteria is attacked by a specific antibiotic, sensitive bacteria tend to perish, while other bacteria possessing favourable mutations turn resistant even in the presence of antibiotics, and these survive, thriving, and rapidly multiplying as the other competing bacteria have died out. Thus, the number of bacteria is on the rise. In addition to this, they mass transfer these genes, which give them resistance to bacteria, to other bacteria. Consequently, bacteria resistant to antibiotics widely spread across, making the entire population become antibiotic-resistant.

2. Find out from newspapers and popular science articles any new fossil discoveries or controversies about evolution.

Fossil discovery of dinosaurs had some interesting revelations. It sheds light on the evolution of reptiles in the Jurrasic era. This revelation gave rise to the discovery of the evolution of other animals, such as mammals and birds. Two unfamiliar fossils recently unearthed in China led to a controversy over the evolution of birds. One such genus of primitive birds were Confuciusornis. These were crow-sized and thrived during the Cretaceous era in China.

3. Attempt giving a clear definition of the term species.

Species is a group or population of individuals having the potential to interbreed and produce sustainable and fertile offspring.

Human evolution can be based on different components, namely:

The following table depicts the same:

5. Find out through the internet and popular science articles whether animals other than man have self-consciousness.

Apart from humans, there are many other animals that possess self-consciousness. One such example is the Dolphin. They are believed to have a high level of intelligence. Also, they have a sense of self and can identify themselves amongst others. They whistle, tail-slap and exhibit body movements to communicate with each other. Some other animals that exhibit self-consciousness are parrots, crows, gorillas, orangutans, chimpanzees, etc.

6. List 10 modern-day animals and using the internet resources link it to a corresponding ancient fossil. Name both.

8. Describe one example of adaptive radiation.

When members of a single assemblage or lineage deviate evolutionarily into a range of different forms, it is adaptive radiation. These are the forms that are governed by natural selection and the usage of resources or habitats. The Darwin’s finches of the Galapagos islands had shared or common ancestors, whereas now, we have different sorts of modified beaks based on their food preferences. In order to suit their feeding habits, these finches have adopted different eating preferences and varied beak types. From a single seed-eating finch ancestor, different finch species with varied dietary habits have evolved, such as blood-sucking, insectivorous entities, etc.

9. Can we call human evolution as adaptive radiation?

10. Using various resources such as your school library or the internet and discussions with your teacher, trace the evolutionary stages of any one animal, say horse.

During the Eocene era, the evolution of the horse began with Eohippus and involved the following evolutionary phases:

Evolutionary traits observed were as follows:

NCERT Solutions for Class 12 Biology Chapter 7 – Evolution is classified under the Unit – Genetics and Evolution. Genetics and Evolution unit holds around 18 marks as per previous trends. In other words, roughly 25% of the question paper has questions appearing from this unit. This total weightage serves as an eye-opener to students, giving them an idea about the importance of the chapter. Hence, all topics must be clearly understood and regularly revised in order to face any type of question appearing in the examination.

The study of the history of life forms on planet earth is covered under Evolutionary Biology. Study of fossils, comparative anatomy and related biochemistry present evidence for evolution.

The chapter summarizes the concept of the origin of life. It briefs about the theoretical aspects of the evolution of life forms. It presents students with adaptive radiation and biological evolution and the different concepts covered.

What will I learn from Chapter 7 of NCERT Solutions for Class 12 Biology?

Chapter 7 of NCERT Solutions for Class 12 Biology explains the following:
Origin of Life
Evolution of Life Forms – A Theory
What is the Evidence for Evolution?
What is Adaptive Radiation?
Biological Evolution
Mechanism of Evolution
Hardy – Weinberg Principle
A Brief Account of Evolution
Origin and Evolution of Man.

Why should I download the BYJU’S NCERT Solutions for Class 12 Biology Chapter 7 PDF?

1. The NCERT Solutions contain easy-to-understand language to help students score high marks in the board exams.
2. The detailed solutions will be helpful not only for the board exams but also for various competitive exams including NEET.
3. The fully resolved solutions clear the doubts of students from the NCERT textbooks.
4. The subject experts design the solutions with accurate and genuine information to improve confidence among students.

How to answer difficult questions regarding Chapter 7 of NCERT Solutions for Class 12 Biology?

To solve complicated questions, students must first be focused on learning the fundamental concepts. Top priority should be given to core sections more than the other areas. Clear knowledge regarding the chapter not only helps students to solve the questions but also helps them to implement new ideas in the future. Students who aspire to opt for this subject in higher education must have a clear idea about concepts like biological evolution, mechanism of evolution, Hardy – Weinberg Principle and a brief account of evolution.