India and the WTO - An Overview of Latest Developments

Aspirants can find information on the structure and other important details related to IAS Exam, in the linked article.

In the Doha WTO conference that took place in 2001, India emerged as the most outspoken of advocates for the developing bloc. The meeting was declared a success since the delegates of 142 countries agreed to a new round of trade talks, including topics such as environment, competition and investment.

There are many implications for the Indian economy as a result of the many agreements signed as part of the WTO. They are discussed below:

Reduction of Tariff and Non-Tariff Barriers

The agreement proposes an overall reduction of tariffs on manufactured products and the phasing out of the quantitative restrictions over a period of time. The important implication is that the firms that have a competitive advantage would be able to survive in the long run.

This agreement forbids the host country to discriminate against investments from abroad vis-a-vis domestic investment i.e. agreement requires investment to be freely allowed by nations.

Intellectual property rights seek to protect and provide legal recognition to the creator of the intangible illegal use of his creation. It includes patents, copyrights, geographical indications, trademarks, industrial circuits, designs and trade secrets. Since the law governing these aspects vary vastly across countries, the agreement stipulates a basic homogeneity of the law so that no infringement of rights occurred. This required some changes in the domestic laws of countries including India. As a result, India amended the Copyright Act, the Patents Act, and the Trade and Merchandise Act. The pharmaceutical and biotechnology industries are expected to be hit the hardest. Another impact on India is expected to be in the transfer of technology from abroad.

Read more on TRIPS in the link.

This agreement deals with giving market access, reducing export subsidies and government subsidies on agricultural products. Read about the Agreement on Agriculture in detail in the link.

This deals with restricting exports of any country that do not comply with the international standards of germs/bacteria, etc. This is particularly related to industries such as marine food, food processing and other packed food.

This agreement is no longer applied. It was valid until 2004 only. It had essentially placed quotas on the amount of textile and clothing exports from developing to developed countries. The developed countries, including the USA and the EU, had this in place to protect their own domestic producers. As a result of this agreement being dismantled, a huge opportunity has opened up for developing nations such as India. To take advantage of this opportunity, India should have preparedness in terms of standardisation, modernisation, customisation and cost-efficiency to satisfy the demands of foreign customers.

There are 4 important recent developments related to India and the World Trade Organisation (WTO).  These 4 are listed below

After India banned 59 mobile apps of China, they have claimed that India has violated World Trade Organization (WTO) rules. Even if China complains, WTO may most likely favour Indian decision due to the following reasons.

Background and Issues related to the Peace Clause

What is a Peace Clause?

High subsidies are seen to be distorting global trade. The peace clause protects a developing country’s food procurement programmes against action from WTO members in case subsidy ceilings are breached.

Why did India invoke the Peace Clause at the World Trade Organisation (WTO)?

In the month of April 2020, India informed the World Trade Organisation (WTO) that the value of India’s rice production was $ 43.67 billion in 2018-19 and India had given subsidies worth $ 5 billion.

What is the issue related to India invoking the Peace Clause?

India was the first country to invoke the peace clause for breaching the subsidy limit for rice for the marketing year 2018-19. The limit is pegged at 10% of the value of food production (called de minimis) in the case of India and other developing countries.

European Union (E.U.), United States of America (USA), Japan, Canada, Brazil and Paraguay have questioned India for invoking the World Trade Organization (WTO) peace clause for exceeding the ceiling on the support it can offer its farmers for rice. The European Union E.U has asked India for all the information on the products covered by the public stockholding programme to assure that only rice support exceeded the limits.

What were the reasons given by India, in support of its breaching the subsidy limits and invoking the peace clause?

What is the next course of action for India?

India has to hold consultations with other WTO members in line with the Bali ministerial decision of 2013 on public stockholding for food security purposes.

There are other issues also like the Agreement on Countervailing Duties, Anti-dumping Duties, etc. which affect India.
Candidates can go through the videos on India, WTO and Dispute Settlement &  Agricultural Subsidies and TRIPS Waiver for better clarification for exam preparation- 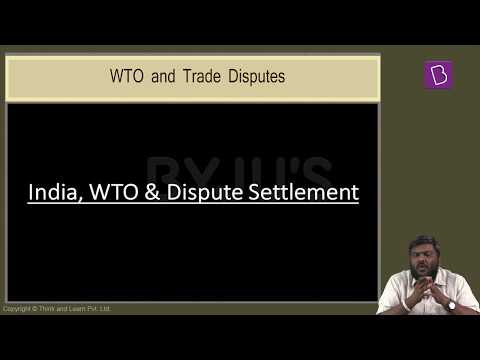 What is the role of India in WTO?

What is the impact of WTO on India?