The interim budget is an important concept that is seen in the news every year. It is different from a regular government budget. The Interim Budget contains detailed documentation of every expense to be incurred and every rupee to earned through taxes in the coming few months until the new government comes to power.

In this article, you can read what an interim budget means and how it is different from a regular budget as well as from a vote-on account. This is an important topic for the IAS exam.

What is an Interim Budget?

An interim budget is presented by the government in the Parliament if it does not have the time to present a full budget, or if the general elections are around the corner. If in case the elections are nearing, it is only correct that the incoming government frame the full budget.

Read the key facts about Union Budget 2021 in the linked article.

How is an interim budget different from a regular budget?

You can read important terms and concepts related to the Union Budget, in the linked article.

The vote-on-account is passed through the interim budget.

You can get an analysis of the interim budget 2019 – 20 in our ‘Economy This Week’ segment here. 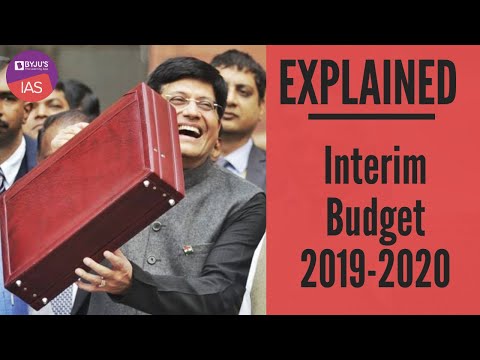 Aspirants read about ‘Interim Budget’ can also read other Indian Economy & Polity related topics linked in the table below:

Q 1. What is the difference between budget and interim budget?

Q 2. Is the interim budget the same as the vote on the account?

Ans. It was presented by the then Acting Finance Minister Piyush Goyal in February 2019.

Ans. The first interim budget was presented by the then Finance Minister R K Shanmukham Chetty for about 7 months (from August 15, 1947, to March 31, 1948). The interim budget was passed since the budget that had been passed by the Constituent Assembly went out of operation after the country was partitioned.

Become familiar with the general pattern of the exam by visiting the UPSC Syllabus page. For more UPSC related preparation materials, visit the links given below: